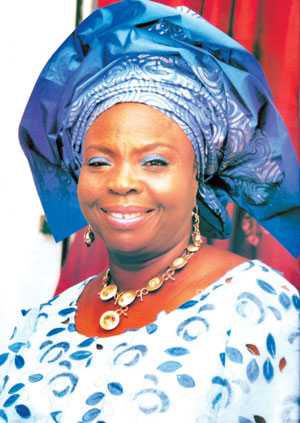 Wife of Cardinal James Omolaja Odunmbaku, the vice chairman of Action Congress, Lagos West, Nigeria, Rachael Olukunbi, has been described as a golden mother in her golden age.

Extolling the virtues of the Mother-in-Israel during the celebration of her 60th birthday anniversary at 10 Degrees Events Centre, Oregun, last Friday, the deputy governor of Lagos State, Princess Sarah Adebisi Sosan and other top politicians, described her as a strong pillar behind her husband.

In their short remarks at the lavish birthday bash, Action Congress (AC), governorship candidates in the 2007 election in Osun and Ekiti states, Engr. Rauf Aregbesola and Dr. Kayode Fayemi, commended Mrs. Odunmbaku for her steadfastness.

Lagos State Commissioner for the Environment, Dr. Muiz Banire, who represented Governor Babatunde Raji Fashola at the occasion, described the wife of one of the political pillars in the state as a virtuous woman, whose care reflected on her husband.

Tributes and toasts were made in honour of the celebrant by well wishers, including top politicians and local government chairmen that thronged the occasion to honour their mentorâ€™s wife.

Cardinal Odunmbaku popularly known a Baba Eto, did not disappoint his teeming followers as he displayed his dancing prowess when he took to the floor with his wife.