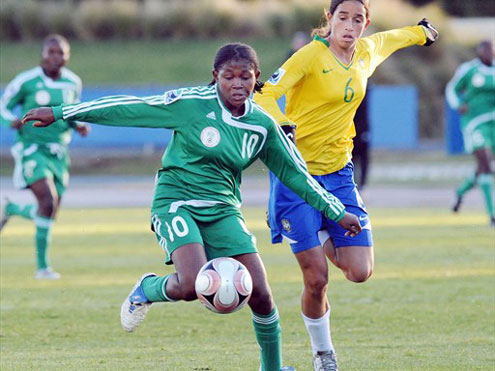 â€¢READY...Falconetsâ€™ Amarachi Okoronkwo will play against Colombia in this eveningâ€™s semi final of the FIFA U-20 Women World Cup.

Nigeriaâ€™s Falconets are poised to face the daunting task of playing in the final of the Germany 2010 FIFA U-20 World Cup with a battle against Colombia this evening.

The match is scheduled for Bielefeld, Germany 5:30p.m.

The semi final match promises to be a fierce battle as the Nigerian ladies have vowed to defeat the Colombians and sail through to Sundayâ€™s final.

It is a remarkable achievement for the Falconets to have advanced this far in the competition, with only Colombia standing between them and the final. Not only are they the youngest squad (at an average of 18 years and 3 months) on duty in Germany â€“ with the exception of fellow west Africans Ghana â€“ but the Nigerian team seemed to have a jinx when it came to finding an escape route from the last eight into the last four. They had played in three previous quarter-finals of the FIFA U-20 Womenâ€™s World Cup and lost them all.

â€œNow we are looking to the final itself, which is our target,â€ Coach Edem Egan told FIFA.com. â€œThe information we have been getting from Nigeria is that all the people areÂ  very happy with the result. It will help the girls a lot to take up the game,â€ he said.

Colombiaâ€™s run to the semi-finals of the FIFA U-20 Womenâ€™s World Cup is an achievement built on self-belief and determination. In their maiden appearance in the tournament Las Cafeteras have defied expectations to reach a stage of the competition that only two other debutants have attained before: 2006 winners Korea DPR and 2004 runners-up China PR.

As the battle line has been drawn, the Falconets will be banking on their star players to put up an improved performance that will see them crushing Colombia in todayâ€™s cracker.Â  There is no doubt that Ebere Orji, who was yesterday listed among the candidates for the FIFA Golden Ball award will be out to prove herself worthy of the award on Sunday.

Captain Desire Oparanozie is another player who is expected to show her leadership qualities on the field of play this evening.

So also will Helen Ukaonu, who scored the equaliser against USA in the quarter final match will be on song for Nigeria as well as Amarachi Okoronkwo, goalkeeper Alaba Jonathan, Ngozi Ebere and Esther Sunday will be out to do Nigeria proud today.