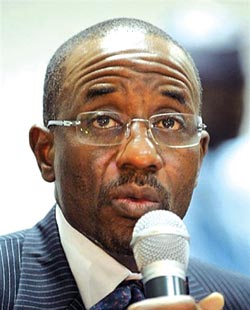 The Central Bank of Nigeria (CBN) Governor, Malam Sanusi Lamido Sanusi, said in Benin that the current banking reforms were inevitable given the state of the banking sector.

He said this at a workshop organised by the bank for Financial Correspondents, noting that the sector was in a bad shape when he assumed office in 2009.

Sanusi said although the banks were affected by the global financial crisis, many of the problems were created by their managements.

He said that the problems were created by excessive risk taking and abuse of depositorsâ€™ funds.

Sanusi said that the banks were facing huge liquidity problems and some of them had taken facilities of between N120 million and N180 million from CBN.

The CBN governor said that some of the banks used depositorsâ€™ funds to fund more than 80 per cent of their public offerings while only 20 per cent were new funds.

Sanusi said that there was no alternative to what the CBN did in the face of “such criminalityâ€™â€™.

He said that CBN had no intention of criminalising anybody but was forced to take such actions by the stark realities of the day.

“No banking industry can continue with the kind of things we saw. We took the actions so that we will not lose the industry.

“But, not a single person lost money in any bank,â€™â€™ he said.

Sanusi said that no central bank had gone to the extent it had gone in Nigeria to revive the banking sector.