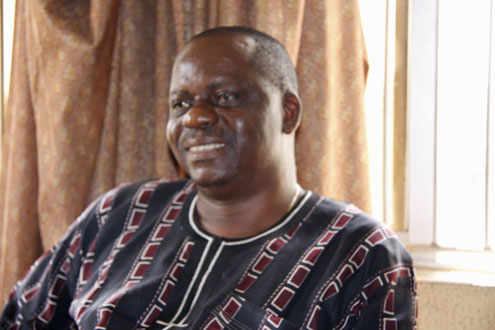 Secretary General of the Nigeria Boxing Federation, NBF, Patrick Uwagbale, is optimistic that the ongoing renovations being carried out by the National Sports Commission, NSC, at the Brai Ayonote Boxing Gymnasium, National Stadium, Surulere, Lagos, Nigeria would help the Federation to discover budding amateur boxing talents. HeÂ  spoke about this and the national boxing team’s chances at the Commonwealth Games holding in New Delhi, India in this interview with ADEBOBOLA ALAWODE

You must be delighted with the renovation going on at the Brai Ayonote Boxing Gymnasium?
If you can read my mind then youâ€™ll know how elated I am. Since we came on board we have been looking at how we can give it a facelift. Now that the NSC has come to our rescue, we can now concentrate on how to develop the sport.

Now that the renovation is in an advanced stage, what should amateur boxers in the country expect?
Well, we donâ€™t want to talk about our plans now. We will wait until the renovations are completed before we start the programmes on our calendar.

What are the programmes?
Like I said we have series ofÂ  programmes for amateur boxers nationwide but we canâ€™t let the cat out of the bag now. WeÂ  want amateur boxers to keep training so that they won’t be caught unware, when we start the tournaments.

Is NSC only renovating the Gym?
No, apart from the renovation, the NSC has also promised to in place state of the art boxing facilities and equipment that would make the Gymnasium a world standard.

How would you rate the championship you just concluded in Akure, Ondo State?
It was a very good championship because we had amateur boxers from all over the country competing for slots in the national boxing team that will go for the forthcoming Commonwealth Games in New Delhi, India. The Sunshine Boxing Tournament really opened our eyes to the fact that Nigeria is blessed with talented amateur boxers.

Were there any upsets at the tournament?
There was no upset except for one of our boxers, who lost. And I wonâ€™t call it an upset because it occurs in any sport, when someone that is tipped to win finally loses. By and large the future of amateur boxing in Nigeria is very bright.

It was in the news sometime ago that the NBF sent boxers to a championship in Morocco but they arrived late for the tournament, what really went wrong?
Iâ€™m not in a position to comment on that issue. My assistant who accompanied the boxers to Morocco is yet to brief me on what went wrong at the tournament.

What are your chances at the Commonwealth Games?
We have a very good chance to do well in India because our boxers have been in camp for a very longtime. We have exposed them to the latest style and tricks in amateur boxing and I donâ€™t see them playing second fiddle to their opponents.

Do you set any target for the team?
We at the NBF donâ€™t like putting our boxers under undue pressure.We don’t need to set target because we know they are good and are hungry for glory.