Show Of Shame In Sango-Ota 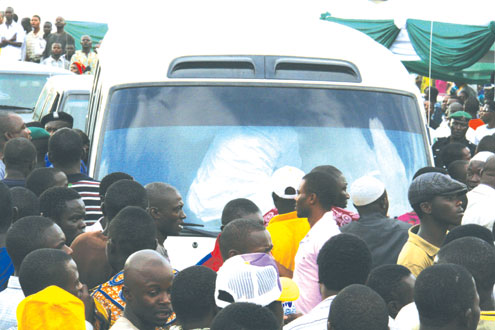 There was a show of shame yesterday in Sango, area of Ogun State, South West, Nigeria when the state governor, Gbenga Daniel and the speaker of the House of Representatives, Dimeji Bankole almost exchanged blows.

The incident happened during the commissioning of the new bridge at Sango. Daniel had arrived before Bankole to commission the bridge, along with works minister,Sanusi Daggash. Bankole, who justifiably believed he should earn the glory for the completion of the bridge, long after it was abandoned by the Obasanjo regime, arrived late. Daniel took over the field totally, bursting out in derisive songs after another against Bankole. This infuriated the speaker who tried to confront the governor by behaving like a typical motor park tout. Bankole, throwing away his status,Â  jumped into Danielâ€™s bus, and tried to stop the driver from leaving the venue.

The drama continued for some minutes before the security details of the governor and Bankole resolved the matter also by flexing their muscles against one another.