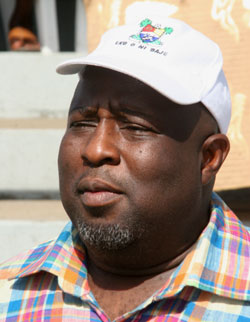 The amateur boxing championship, tagged Sunshine Boxing Tournament was organised by the Nigeria Boxing Federation, NBF, to giveÂ  amateur boxers across the federation a chance to fight against those selected by the NBF.

Dabiri was impressed that the Lagos State contingent were able to clinch four gold, one silver and bronze medals at the competition, even though they had a very short time to prepare for the competition.

The chairman, who admittedÂ  he didn’t expect much from the boxers because of the short notice they had, praised the boxers for making the state proud saying they are worthy of commendation.

According to him â€œOur achievements in Akure have shown that Lagos State is a force to reckon with in amateur boxing in Nigeria. For our boxers to have gone there and come back with six medals clearly showed that we are still the best state that produces amateur boxers for the country. We wonâ€™t relent in our oars to maintain and even surpass our achievements in subsequent competitionsâ€.

One of the boxers, who won gold for the state in the 58kg category, Taiwo Agbaje attributed his success in Akure to God, the state government for their support and the Lagos State boxing coaches for giving him the required training.

According to the 18 years-old boxer â€œcoming back to Lagos state with a gold medal is not an easy feat because we had boxers from allover the country so for me to have returned with a gold medal means God really wants me to winâ€.