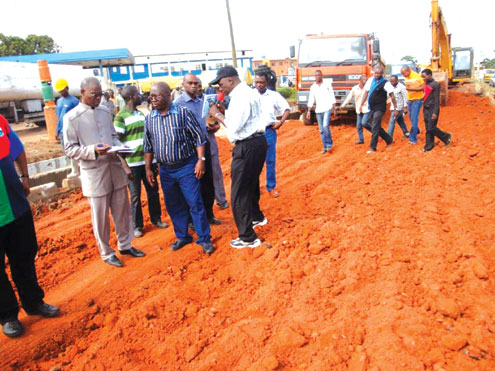 Motorists plying the Egbeda-Idimu-Ikotun road will soon heave a sigh of relief as the Lagos State Government has assured that the road would be completed before the end of this year.

Progress of work on the road had been slow, a situation attributed to the early starting of the rains and the delay in passing the budget into law.

Motorists have had harrowing experience plying the road because of its dilapidation, leading to traffic jam, while they spent hours several trying to wade through the bad road, which becomes worse whenever it rained.

Respite has, however, come their way as the contractors were busy working on the road to meet the deadline.

Special Adviser to the Governor on Works and Infrastructure, Mr. Ganiyu Johnson, inspected the level of work on the road last week and assured that the harrowing experience by motorists would soon be a thing of the past as government would deliver it before December.

According to him, two contractors were currently working to upgrade the 9-kilometre road, with each of them awarded 4.5 kilometres of the road to handle.

The overall level of work done on the road, according to Johnson, is 40 per cent and that the contractors would be motivated to double their efforts so that the road would be completed before December.

He said before it was decided to upgrade the road, it had been totally dilapidated but government was bent on meeting the demands of residents in the area and motorists plying the route.

On why the delay in completing the project, the special adviser said the delay in passing the budget, the rains and inability of the contractors to move their logistics to site on time contributed to the delay.

On the second part of the 4.5 kilometres of the road being handled by Plycon, work done so far include scarification, 1,565m; stone base, 736m; walkway kerb, 1250m and 10 service ducts.

â€œThe overall assessment of the road rehabilitation and upgrading is 40 per cent over performance,â€ said Johnson, while enjoining Lagosians not to relent in paying their taxes as at when due since that was the only avenue by which the state government could deliver more services to the people of the state.

â€œLagosians should bear with us and have faith in the government. When this road was really bad, they called on us to upgrade it and as a responsible government, we embarked on the project and within a short time, we will hand it over,â€ he assured.

Permanent Secretary, Lagos Television, Mr. Lekan Ogunbanwo, who was also on the site said the state government was trying as much as possible to ensure that the road was delivered on time.

He, therefore, appealed to the public to bear with the government and continue to support the present administrationâ€™s effort in building a model mega city that befitted the black race.