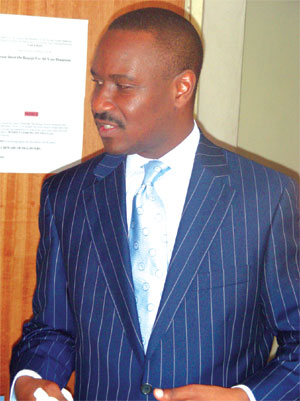 Members of the Redeemed Christian Church of God (RCCG) have moved in droves to Trinity House, a church founded by excommunicated clergyman, Pastor Itua Ighodalo, our correspondent observed yesterday. The church held its thanksgiving service at the luxurious banquet hall of the Civic Centre in Victoria Island, Lagos, South West Nigeria.

observed that additional chairs were placed outside the main auditorium to accommodate the huge crowd when the hall, with a capacity of 800 seats could not take more worshippers.

The parking space at the Civic Centre was too small as dozens of vehicles belonging to worshippers were parked by the roadside when the service was going on. Loud speakers were also used for those outside the auditorium. The children church was equally filled to capacity. The banquet hall is rented at N1.8 million a day.

P.M.NEWS learnt that worshippers at Ighodaloâ€™s new church are mostly former members of Christâ€™s Church, a branch of RCCG in Gbagada, Lagos, where Ighodalo preached until he was excommunicated by RCCG General Overseer, Pastor Enoch Adejare Adeboye.

Ighodalo was excommunicated by Adeboye for getting married while his former wife was still alive as against biblical injunction that a man must remain single until his wife dies. He had remained single for ten years before settling for Ibidun, a former Miss Lux.

With a sparkling wedding ring on his finger, Ighodalo took a glance at the woman who led to his excommunication and then turned to his congregation and said:

He said that before he was thrown out of Redeemed Church, he knew Christâ€™s Church so well that â€œif a stone was missing, I knew where it was missing from. I had invested my life, heart and soul there.â€

Ighodalo then danced before his wife who was shedding tears, hugged her and cleaned her face.

As if he was narrating his own story, Ighodalo read the Book of Genesis chapters 39 and 40 where the bible narrates the story of Joseph who was betrayed and sent into slavery by his brothers only to emerge Prime Minister in Egypt some years after.

He continued: â€œA friend of mine sent me a text and told me that â€˜when you were going through crisis last year, you did not know that there will be 18 of July this yearâ€™,â€ the day he opened his new church.

Holding his brown cover Bible, Ighodalo, a chartered accountant who runs his accounting firm, told his elated congregation that his church has come to set standards in Christianity.

â€œAt trinity House,â€ he said, â€œwe believe that while man may seem to forget you, God will not forget you. He will bring you out. He will transform your life.â€