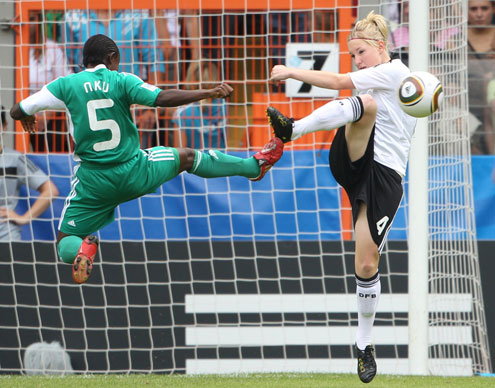 Nigeriaâ€™s Falconets, who are due back from Germany tonight after winning silver medal at the FIFA U-20 Women World Cup would be hosted to a reception by the Presidency.

The Falconets had a wonderful moment for Nigeria with their notable achievement as the first African team to play in the final of a FIFA Womenâ€™s World Cup.

Although, the coach Ndem Egan-led squad lost 0-2 to hosts, Germany in yesterdayâ€™s final, but President Goodluck Jonathan says he was pleased with their outstanding performance.

It was gathered that the presidency will reward the Faconets and their officials, who are scheduled to arrive the Murtala Mohammed Airport at 8p.m aboard Lufthansa airline this evening.

Coach Egan believes the team, who displayed pace, power, passion and solid organisation throughout the three-week tournament in Germany, have set the standard for other African nations to follow.

â€œWe will now be a role model in Africa for womenâ€™s football,â€ Egan said. â€œWe are very happy with the performance of our team. There are some great prospects among them and some will graduate to the senior womenâ€™s team. Undoubtedly theyÂ  learnt from their experience in Chile two years ago.â€

The team including Ebere Orji, Desire Oparanozie, Glory Iroka and Helen Ukaonu to metion just a few distinguished themselves with good leadership from Joy Jegede, showing a good example of what can be achieved through hard work and dedication.