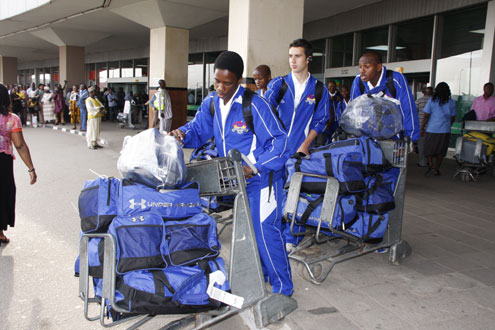 First to arrive hit the country were SuperSport United Football Club of South Africa, they arrived at 4: 45 pm, while F.C Utrecht of Holland and Liberty Professionals of Ghana have also landed. The teams arrived aboard Arik airline. Team LagosÂ  join the visiting teams.

The Youth Cup, put together by Lagos State government, kicks off today at the Teslim Balogun Stadium, Surulere. The tourney will be played on round robin format.

Meanwhile, Head of Delegation of SuperSport United, Godfrey Mosoetsa, on arrival in Lagos yesterday, praised the government of Babatunde Raji Fashola for inviting them for the tournament, saying that such gesture would go a long way in preparing the youths for age- grade competitions in the future.

He disclosed that his team are not in Lagos to complete the numbers but to win the tournament, adding that he has a team that would give their opponents a run for their money.

According to him, â€œI want to commend the organisers for thinking towards this direction. This is good because it would afford the players an opportunity to exhibit what theyâ€™ve been thought in training, and it would also expose them.â€