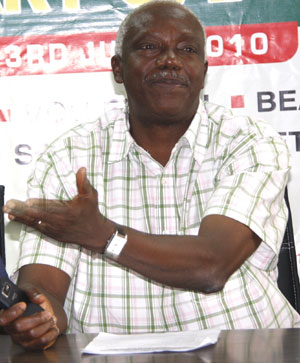 Prince â€˜Wale Oladunjoye is the Tournament Director of the Governorâ€™s Cup Lagos Tennis Championship, an annual competition approved by International Tennis Federation, ITF, with prize money of $80,000. Prince Oladunjoye, who is also the Senior Special Assistant on Grassroots Sports Development to Governor Raji Fashola of Lagos State, told Taiwo Adelu in this interview that the preparation for the 10th edition of the championship scheduled for October this year, is gradually gathering momentum

The 10th edition of the Governorâ€™s Cup is coming up in October, how are the organisers preparing for the tourney?
The Local Organising Committee, LOC, headed by Chief Pius Akinyelure is working round the clock to ensure that we have a memorable tournament this year. The relationship we have with our sponsors, Etisalat and FCMB, is cordial and the partnership is great. We have been contacting them as usual and I must say that they have promised their unflinching support. The Nigeria Tennis Federation, NTF is also cooperating with us to ensure that all technical details needed for a good competition are in place. I think the preparation for the championship is on course. Iâ€™m glad to say that the competition was listed on the website of the ITF long before this time. This shows that nothing is going to change the time of the tourney as planned in October.

Nigerian tennis enthusiasts will like to know if there is plan by the organisers to make this 10th edition a memorable one.
Of course, we have lined up a lot of programmes to add glamour to this yearâ€™s competition. The plan is underway to unveil a milestone very close to the serve off date of the competition. This will be done on the press conference day, few days to the tourney. We are also planning to take the international players on a tour of the city of Lagos as part of our contribution to boost tourism potential of the state. This will allow the players to feel and see the beauty of Lagos, so that by the time they get to their various countries, they will be able to recount better experience of the city to their people.

Is there plan to increase the prize money from the current $80,000?
We will be glad to increase the prize money, but we are also mindful of the repercussion of this action. Any increment in the prize money will automatically force the ITF to bring in stringent conditions that may be counter-productive to our local players. There is no doubt that increased prize money will attract quality players from abroad, but the ITF will also increase the rankings status of players who will take part in the tourney. We have sat down to consider all this condition which may be to the detriment of our local stars who are still finding it difficult to measure up to their foreign counterparts. The vision behind Governorâ€™s Cup is to expose our players to international players around the world. I think it is not good to bring in many players and leave our players out of the tourney. I want to assure that our plan is to see that the Governorâ€™s Cup remains a Futures in the calendar of the ITF.

The tourney is reaching its 10th edition this year, how has it been since the first edition?
It has been great since our first tournament and every year, there has been improvement in the organisation and packaging. I want to say that we have been having excellent people in the LOC. They were committed to the success of the tourney every year. Our sponsors are also doing great to see us going. The NTF has not come short of its responsibility. The federation has been supportive. I believe that with the support of everybody, weâ€™ll have a good tournament this year.