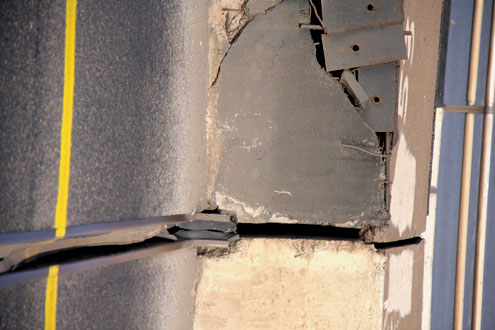 Even though there are cracks on the Third Mainland Bridge in Lagos, Nigeria, the Federal and Lagos State governments have allayed fears over the possible collapse of the bridge.

Fear gripped several motorists in Lagos yesterday following the speculations that the bridge would soon cave in as a result of the crack identified.

Road users had blamed the cracks on the bridge on structural failure as some of the expansion joints had started caving in.

Some Lagosians were seen making frantic calls and sending text messages to their loved ones who might be coming home through the bridge to take another route as danger was lurking, while the panic led to traffic gridlock in some parts of the metropolis when motorists avoided the bridge.

Text messages were being spread yesterday telling motorists not to ply the bridge because it might cave in very soon and that sent fears across the metropolis.

The text message, according to the Special Adviser to the Governor on Transportation, Mr. Kayode Opeifa, was completely false and should be disregarded.

Opeifa refused to forward the text message to PM NEWS, when asked to do so by our reporter, saying that he would not be a party to those spreading the rumour of possible collapse of the bridge.

Also, the Federal Controller of Works in Lagos, Engineer Ejike Mgbemena allayed fears about the possible collapse of the bridge, saying that the bridge was still very durable.

He said there was no problem with the bridge as he and some officials of the ministry had gone to inspect the bridge, stressing that the bridge was sound and functional.

â€œThere is no problem on the bridge at all. We just carried out its inspection. The bridge is sound and functional. I have even told the governor about it,â€ he said.

In a statement issued by the Lagos State Government on the bridge, it also allayed fears that the bridge would cave in any moment from now, assuring motorists of their safety on the bridge.

The statement signed by the Special Adviser to the Governor on Works and Infrastructure, Engr. Ganiyu Johnson and Opeifa urged Lagosians to disregard a false text message currently in circulation warning that the bridge was unsafe and would soon collapse.

The statement confirmed that a team of engineers from the state government visited the bridge to assess its safety and discovered that there was no problem at all to warrant motorists being afraid of a possible collapse of the bridge.

According to the government, there was nothing wrong with the bridge, urging Lagosians to go about their normal duties, with words of assurances that â€œthere is no cause for alarm.â€

Police Public Relations Officer, Lagos State, Mr. Frank Uba had earlier drawn the attention of Lagosians to series of false messages being circulated by some phoney characters in the state.

He urged Lagosians not to entertain any fears, but go about their normal duties as the bridge would not collapse.

In 2008, experts were brought in from abroad to fix some of the expansion joints on the Third Mainland Bridge as Governor Babatunde Fashola had raised alarm of the poor state of the bridge.

The bridge was then partially closed for two months to allow for rehabilitation which was carried out at a sum of N762 million.