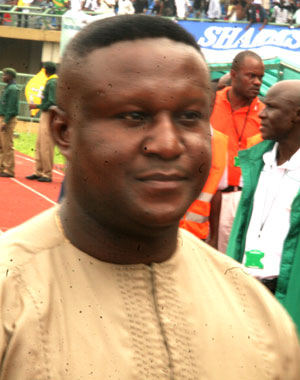 The ambition of Enyimba at this yearâ€™s CAF Confederation Cup was thwarted on Sunday when they failed to cancel the four goals they conceded against Zanaco Football Club of Zambia in the return leg played at the Aba International Stadium. Chairman of the club, Felix Anyansi, after the encounter spoke in this interview with SUNDAY AKINTOYE on why the club crashed out of the championship

How would you rate your teamâ€™s performance against Zanaco FC of Zambia?
They played a good football by scoring two goals against their opponents from Zambia. Actually, we were looking for five goals before the match started but at the end of the day, we managed to score two goals that could not qualify us to the next stage of the competition.

Your team conceded four goals from Zanaco FC in Zambia during the first leg of the encounter, what went wrong?
We lost the match in Zambia because the players allowed our opponents to score four unreplied goals. Our problem started when we went to Zambia with only 15 players instead of our regular squad. I think we paid dearly for our mistake in Lusaka.

Why did you go to Zambia with 15 players?
Some of our best players disappeared immediately after Enyimba won the Nigerian League. The club management paid the outstanding entitlementsÂ  of the players so that they can give their best to the club in the CAF Confederation League.
But, they left for Europe to seek for greener pastures without the permission of the club management. Some of the players went for trials,Â  while the others are no longerÂ  committed to the team.

Who are the unfaithful players in camp?
They know themselves. I am not going to disclose their names to the public now because we have forwarded their names to the Arbitration Panel of the Nigeria Premier League to take an appropriate action. We are waiting for the response of the Panel before we can mention names.

What disciplinary action will the club management take against the players that left for trials without permision?
Definitely, we are going to punish the undisciplined players when they return. Donâ€™t forget that we also missed some players because of injury problems. The players are Josiah Maduabuchi, Uche Kalu, Osas Idehen and Emeka Emedosi. We are not going to punish the injured players.

Are you now blaming the players for Enyimbâ€™s flop in Lusaka?
Their absence really affected the game plan of the coach. Had it been we went to Zambia with our full squad, we would have played at least a draw in the match or possibly win the game in Zambia.

Any plan to buy new players to fortify the team when Eyimba represents Nigeria in next yearâ€™sÂ  CAF Champions League?
I cannot say anything now. All I know is that the team will be restructured very soon.

How would you rate the Zambian team, do you see them in the final?
The Zanaco I saw in Aba were coordinated and very aggressive on the ball. The players were adventurous and in search of glory. If they can continue like that, I see them going far in the tournament

Why are you interested in contesting for a post ion on the board of Nigeria Football Federation, NFF?
I want to be part of theÂ  federation to contribute my own quota to the development of football in Nigeria. With my experience in football, I think I have enough experience to change the face of Nigerian football.