Falconets: Nigeria's Hope For The Future 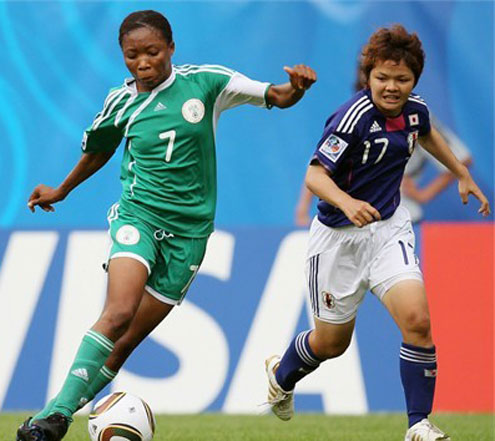 The performance of the Falconets of Nigeria at the just concluded FIFA U-20 Women World Cup in Germany was a clear indication that Nigerian football can rise again after the poor outing of the Super Eagles at the South Africa 2010 World Cup.

About a month ago, President, Goodluck Ebele Jonathan, suspended the national teams for two years from taking part in international competitions, following the abysmal outing of the senior team at the World Cup.

While some Nigerians supported the decision of the Federal Government on the ban, others said the decision will put the future of Nigerian youths in jeopardy.

After a lot of pressure from soccer loving Nigerians and Nigerians in the Diaspora, Jonathan succumbed to international pressure and rescinded his decision, which paved way for the Falconets to take part at the just concluded Germany 2010.

Before the Nigerian team travelled to Germany, the players were optimistic that they wonâ€™t disappoint the country. They even promised Nigerians that they would go beyond the quarter final stage, which the country reached in the last three editions of the world tourney.

Nobody actually gave the Falconets a chance to go as far as the final of the FIFA U-20 Women World Cup until they shocked defending champions, USA in the quarter final.

The coach Edem Egan-tutored side went ahead to beat Colombia 1-0 in the semi final to set up a final clash with the Germans, who ended as goodÂ  hosts.

The Nigerian team did not lose a single match on their route to the final until they succumbed to the superior fire power of Germany, conceding two unreplied goals in the pulsating encounter watched by a capacity crowd in the city of Bielefeld.

Despite the defeat, the Nigerianâ€™s ladies returned home happy and comfortable with their performance in Germany.

Back home in Nigeria, many Nigerians are happy with the ladies for their brilliant performance at the World Cup, especially their last match against Germany.

Nigeria’s President, Jonathan, Senate President, David Mark and other top government officials also applauded the team for the spirit of sportsmanship exhibited during the competition.

And, like successful soldiers just returning from the war front, the Falconets were given a heroic reception Monday night when they arrived at the Murtala Mohammed International Airport, Ikeja, Lagos.

On arrival, the gallant Falconets were received by the wife of LagosÂ  governor, Abimbola Fashola, while a grand reception was also organised for them by the wife of the President, Patience Goodluck in Abuja.

The ladies deserve whatever is given to them by the government.

Coach Ndem Egan, who led the team to Germany was satisfied with the display of the ladies and has advised football authoritties in the country to draft the players to the senior national team.

â€œWe will now be a role model in Africa for women football. We are very happy with the performance of our team.

“I can only advice the chief coach of Super Falcons, Eucharia Uche to invite all the players to camp ahead of the forth coming Africa Women Championship, which holds later in the year in South Africa,â€ he said.