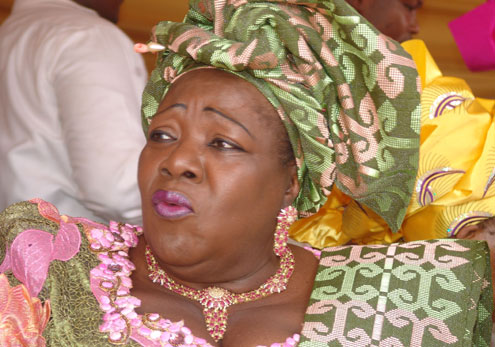 Following the sack of the Director-General of the Nigerian Stock Exchange, NSE, Ndi Okereke-Onyiuke yesterday, there are speculations about her likely successors.

Okereke-Onyiuke was removed by the Director-General of Securities and Exchange Commission, SEC, Ms Aruma Oteh, in the wake of the crisis that has rocked the NSE.

The crisis was precipitated by allegations that billions of naira had disappeared from the accounts of NSE under the watch of Onyiuke.

Billionare Aliko Dangote blew the whistle on the alleged sleaze in NSE in a petition he sent to the Securities and Exchange Commission, which acted swiftly by removing Onyiuke to pave way for her probe.

Apart from the impending probe of Madam Stock Exchange, as Okereke-Onyiuke is called, who replaces her as NSE DG is now the issue. And the three names within the NSE that are being touted are Binus Yaro, the GM, Quality Control; Kenechukwu Okafor, GM, Quotations and Listings; and Taba Peterside, the GM Operations.

Even before her sack, the issue of who succeeds her had caused crisis within the NSE as she was accused of plotting to extend her tenure or manipulate the selection process to enable her bring in her crony.

In February this year, the national chairman of the Progressive Shareholders Association of Nigeria, PSAN, Boniface Okezie, appealed to the NSE Council to intervene in the selection process to prevent rancour.

The next-in-command to the sacked NSE DG, Musa Elakamah, who would have succeedd Okereke-Onyiuke, was retired in March this year. He was consumed by the politics of the crisis rocking the NSE.

Two general managers -Uzoma Onyekuru, who was in charge of Compliance and Special Projects; and Yinka Idowu, Head of Corporate Affairs, had been retired in June last year.

The search for a new NSE DG may spread outside the stock exchange as sources said a Nigerian with international experience in capital market operations may be the man for the job.

Sources said an indigene of South-Western Nigeria working with the London Stock Exchange will be a possible interview candidate for the job.

Meanwhile, the sack of Okereke-Onyiuke is still causing ripples in the capital market. Speaking on the issue, the Assistant Director/Head Media, Securities and Exchange Commission (SEC), Mr Lanre Oloyi, in a statement issued on Wednesday, noted that the sack of Professor Okereke-Onyiuke, was necessary to protect investors in the market.

He said the Investment and Securities Act 2007 vested the unalloyed responsibility for safeguarding the interest of the public and protecting the investors on the SEC. According to him, the commission had closely followed the developments in the NSE, particularly with respect to inadequate oversight of the exchange, ongoing litigation, allegations of financial mismanagement, governance challenges, and the inordinate delays in the implementation of its succession plan.

Dangote had petitioned SEC, alleging massive fraud at NSE. According to the petition, the Exchange made a gross income of N42.2 billion in four years, up till the end of 2007 when it netted a cash surplus of N9 billion.

Today, the NSEâ€™s account is in deficit and is unable to meet its obligations to its service providers, he said.

Dangote said the NSE has an investment of N1.3 billion with associated companies, without commensurate returns. In addition, it is delinquent in its funding of its pension scheme to the tune of N2.6 billion, N423 million out of which is said to be kept in an insurance company. The petitioner said the existence of the latter has not been verified.

Dangote also accused the NSE of dipping its hands into the money of the Central Securities Clearing System, CSCS, to alleviate its deficit financing. N900 million of CSCS money has been taken away by NSE, he revealed.

And so bad is NSEâ€™s financial situation that it is unable to pay the N119 million invoice of Accenture, the firm helping it to handle executive selection and trading platform selection. Accenture, consequently, has suspended its service to NSE.

Mr. Sola Oni, the general manager, public relations of the NSE, denied Dangoteâ€™s allegations, insisting that NSE is not insolvent.

He added that it is meeting all its obligations.