Ex-Eagles Vow To Take Over NFF 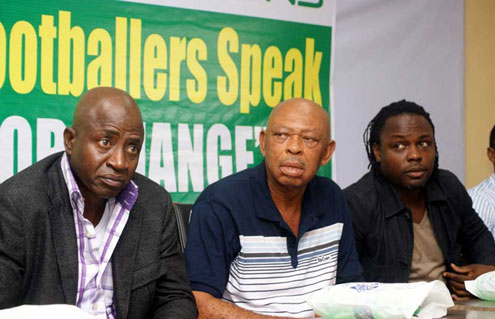 Former Nigerian internationals have declared their intention to take over the administration of football in Nigeria.

The ex-Super Eagles stars, who addressed the press yesterday at the Teslim Balogun Stadium, Surulere, Lagos, Nigeria are of the opinion that it is time they took part in the running of the round leather game in the country. They said there is need for them to speak with one voice and ensure some of their colleague are on board of the Nigeria Football Federation, NFF, in the coming election, which is scheduled to hold this month in Abuja.

The ex-internationals vowed to employ everything within their disposal to achieve their goal by winning most seats on the board of the NFF in the election.

While unveiling their candidates for the election, Victor Nosa Ikpeba, (MON) said the ex-Eagles could not continue to sit back and watch the rot inÂ  countryâ€™s football without taking any action to stop it. He said posterity will judge them if they did not act now.

The former African Footballer of the Year award winner stated that it is time all genuine stakeholders of the game rose up to take the bull by the horn by rescuing the game from the â€œcabalâ€ that have been milking Nigerian football for long.

Prince of Monaco, as he is fondly called during his playing days, disclosed that the theme for the press briefing â€œTime For Changeâ€ is to tell Nigerians that former internationals are ready for the change that will see Nigerian football getting its freedom from the â€œcabalâ€

He noted that since 2000, things have really gone from bad to worse to such an extent that Nigerian football is now in the doldrums.

The candidatesÂ  are â€˜Chairmanâ€™Â Â  Christian Chukwu (MON), who was absent at the event. He is contesting for a seat on the board of NFF from Enugu State in the South East Zone. Current General Manager of Shooting Stars Sports Club, 3SC, of Ibadan, Mutiu Adepoju wants to be on the board from the South West Zone.

Former Super Eagles’ captain, Austin â€œJay Jayâ€ Okocha (MON), is from Delta State (South-South Zone)Â  and Chief Olusegun Odegbemi (MON), is gunning for the Presidency of the NFF. He is from Ogun State in the South West Zone.