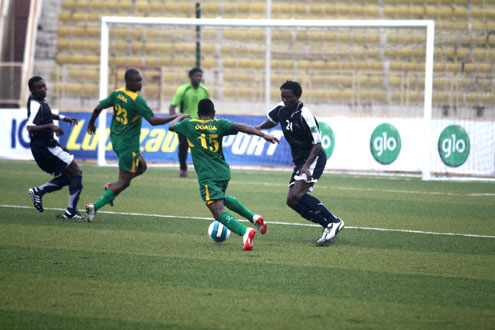 Despite playing their Nigeria Premier League, NPL Super 4 second match with a man down, Sunshine Stars of Akure yesterday defeated Kano Pillars 1-0 to remain in contention for the trophy.

A very mobile Dayo Ojo, who rounded off defenders John Yanpe and Bala Mohammed in the 15th minute, took the ball deep inside Pillars’ box before unleashing the shot that caught goalkeeper Afelokhai Theophilous napping.

Although, the attendance at the Ijebu-Ode stadium was still very low, but the fans that turned up for the matches, had something to cheer with the classical football display of the Akure boys.

Sunshine, who Wednesday lost their opening match 0-1 to Enyimba, survived all odds including the expulsion of defender Osas Precious after bagging a red card deep in the first half.

The Sunshine player brought down a goal-bound Moses Ogaga of Pillars at about 25m from goal line and referee Emmanuel Imiere of Edo State did not hesitate to show him a deserving red card.

There was a mild shower when the match commenced but both clubs utilised the cool atmosphere to give their best in the game.

What could have been an equaliser for Pillars came off the boot of Rabiu Ali, as his long shot from the right flank beat goalkeeper Sunday Makama. But the ball hit the upright and bounced into touch, leaving the scanty crowd to yell on top of their voices.

In the 19th minute, Pillars tried to level score, with Rabiu Ali and Moses Ogaga enchanging quick passes but the former’s shot met the brickwall as goalkeeper Makama cleared the ball away.

After losing possession of the ball, an attempt by Ali to stop a Sunshine player in the 21st minute earned him a yellow card. Sensing that their opponents were fighting back into contention, Sunshine’s Coach, Solomon Ogbeide pulled out skipper Godfrey Oboabona, who suffered a minor injury and introduced Alaba Osawe to beef up the centre defence.

Pillars’ Victor Namo tried a die minute effort to level score before the break, but keeper Makama was up to the task and maintained a clean slate.

And, in fulfillment of watching a nice and entertaining match, the scanty crowd applauded players of both teams as they filed out of the pitch to refresh for the second stanza.

The exciting game continued into the second half with Pillars’ Coach, Salisu Yusuf bringing on Ibrahim Nafiu for Abba Usman to beef up their attack.

The substitution almost paid off in the 50th minute when Namo received a pass on the far right. As the player moved towards Sunshine’s penalty area, his unmarked striking partner, Ogaga ran to the other side signalling for the ball to jab in, but Namo snubbed him and played into the waiting hands of goalkeeper Makama.

Pillars’ Coach, Yusuf, who appeared satisfied with the pressure on their Akure opponents, brought in two more players; Ahmed Garba to replace Thomson Joseph while Ogaga was pulled out for Ammani Kamilu with about 20 minutes left on the watch.

At this time, the northerners gained more ball possession and made some daring moves into Sunshine’s rear.

A loose ball found Ali and he floated a long pass to Musa Musa, who overlapped to the far right from his right back position, but the finishing was very poor as his feeble shot missed the second pole.

Coach Ogbeide, who was apprehensive of their opponents’ threatening moves vacated his seat to dish out instructions to his visbly confused defenders. The coach pulled out Sharafa Usman in the 80th minute and substited him with Akin Ogunboye to block the offensive play of Pillars from the midfield.

Pillar’s Nafiu, who came in as substitute bagged a yellow card for foulplay in the die minute of the game while the 10-man Sunshine Stars went away with the lone goal to place second on the Super 4 table with three points.

Coach Ogbeide was pleased with the fantastic display of both teams, saying “We enjoyed a good match against Pillars,that’s why the fans were heard applauding every minute and Sunshine won because the players played to our instructions. We were tactical in our approach and we can still win the Super 4 trophy”.

Pillars’ Coach, Yusuf blamed his team’s loss to Sunshine to poor marksmanship. But he expressed happiness that the officials were able to test their new players in Ijebu-Ode, which he claimed is the main purpose of featuring in the tourney.