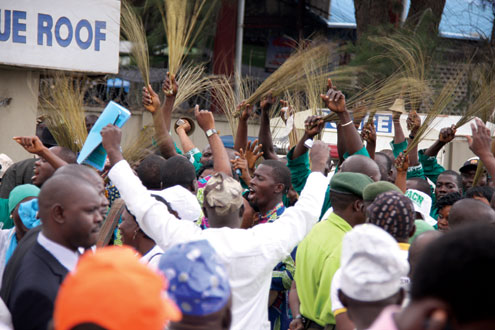 Thousands of Action Congress members and supporters of other parties gathered this morning at the Blue Roof of Lagos Television, Lateef Jakande Road, Ikeja, Lagos, Nigeria, to formally ratify the merger of the party. TheÂ  huge turn out of supporters was almost marred by a stampede, as the teeming supporters tried to gain an entrance into the convention ground. Several supporters fainted and had to be resuscitated by an emergency medical personnel on ground. Chairman of the Action Congress, Chief Bisi Akande apologised for the poor crowd control.

Todayâ€™s convention also witnessed the change of AC constitution to reflect the new name of Action Congress of Nigeria, ACN.

According to the Chairman of Lagos AC, Otunba Henry Ajomale, the merger is between the AC, the Integrity Group of the All Nigeria Peopleâ€™s Party, ANPP, Democratic Peoples Party, DPP and other political parties.

Todayâ€™s convention also witnessed the change of AC constitution to reflect the new name of Action Congress of Nigeria, ACN.

Chief Ajomale told P.M.NEWS that the directive to change to ACN was that of the Independent National Electoral Commission, INEC, which said if AC must change its name to ACN, it must reflect the new name in its constitution.

Ajomale said the ACN was out to change the face of politics in the country as it was determined to take over power from the PDP.

â€œBy this change of name, we are going to focus on issues that will make us to express ourselves better. Once we are able to establish ourselves in the first election to be conducted in 2011, the remaining ones will be simple.

â€œACN is for change. We want a change from the corrupt tendencies of the PDP. We want to take over Nigeria,â€ Ajomale said.

He said that todayâ€™s convention is for the change of name while the national convention of the new ACN will hold on 25 September in Edo State.

The immediate past governor of Lagos State, Asiwaju Bola Ahmed Tinubu said that the Action Congress of Nigeria believes in Prof. Attahiru Jega, provided they give him the room to perform as he isÂ  known to be a man of integrity.

Speaking with P.M.NEWS this afternoon at the partyâ€™s national convention, Tinubu said the emergence of the ACN was to checkmateÂ  the ruling PDP which has continued to hold Nigerians hostage and to chart a new course for the masses.

In his comment, the chairman of AC, Chief Bisi Akande lamented that the PDP had in the last six months, been discussing its internal problem which is zoning rather than attending to the problems of the nation.

Said Akande: â€œItâ€™s unfortunate that when most Nigerians are languishing in poverty, PDP was busy looking into a way of further sinking the nation into a red sea.â€

Aspirants to political offices across the nation used the convention to make their aspirations known by their campaigns.

Before the new change, AC which is now ACN, was founded in 1998 as Alliance for Democracy, AD, when some South-West politicians broke away from the All Nigeria Peopleâ€™s Party (ANPP).

Their decision was hinged on mistrust for some elements in ANPP who had played questionable roles in the annulment of the June 12, 1993 presidential election. The breakÂ  away party was named Alliance for Democracy (AD).

After the election of 1999, the ADÂ  was polarised by the PDP, with former President Olusegun Obasanjo, giving appointments to Chief Bola Ige and the daughter ofÂ  Chief Abraham Adesanya. The appointments sowed the seeds of further destruction, as some of the party leaders fully embraced Obasanjo, with some of the governors agreeing to work for Obasanjoâ€™s re-election in 2003. The political engagement with Obasanjo wiped out the party differences and eventually destroyed ADâ€™s hold on the South West.

Out of the factionalised AD was born in 2006 the Action Congress, which attracted many members from the PDP.