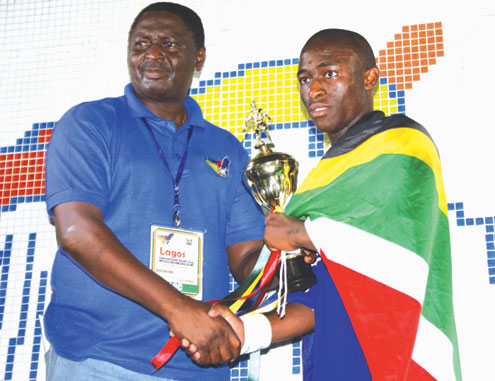 Ngidi of Supersports Unted Football Club was voted the Most Valuable Player of the competition and also emerged the highest goal scorer with 6 goals. The second best player was the captain of the FC Utrecht Yassin Ayoub, while the third best player was Eugene Ansah of Liberty Academy.

Nigidi disclosed that he is set to consolidate on the success achieved at the just concluded tourney organised by the Lagos State Government.

Immediately after his team were crowned champions of the round robin tourney, which four teams participated: Lagos United, FC Utrecht of Holland and Liberty Academy of Ghana, the pintsized forward, who mesmerized his opponents with his speed and dribbles disclosed to P.M Sports that he is elated with the two individual awards he won. He dedicated the awards to his teammates, Africa and the rest of the world.

Ngidi said that if not for the support of his teammates he would not have been able to win the awards.

â€œIt is a good thing that I won two medals but it wouldnâ€™t have been possible without the assistance of my teammates. I want to specifically thank my teammates for standing by me and I want to dedicate these awards to them,â€ he said.

On his experience in Nigeria, he described it as a wholesome one and would like to visit the country whenever he is called upon to do so. He added that the organisers of the tourney gave them the opportunity to interact and exchange ideas which would go a long way in helping them in their career.

He, however, urged clubs interested in his signature to come and get him saying â€œIâ€™m young and I still have a long way to go in my career but I wonâ€™t rush into doing anything or signing any contract, as it may work against my aspiration.â€

He advised other countries to follow the footsteps of the Lagos State government by staging competitions like this because it would help youngsters in different parts of the world to sharpen their skills and learn one or two things from their counterparts.

â€œHow I wish we could have another competition like this because it is this kind of opportunity thatÂ  we, as young players, need to do well in future,â€ Ngidi said.

Meanwhile, at the final of the weeklong soccer competition, the Honourable Commissioner for Sports, Prince Ademola Adeniji Adele, having commended the good football artistry displayed by the participating teams said that it shows that the future of the game is bright for countries on the continent.

â€œIt really shows that we can have real under 17 players as demonstrated by the team from Lagos State,â€ he noted.