7 Dead, Many Trapped, As Storey Building Collapses In Abuja 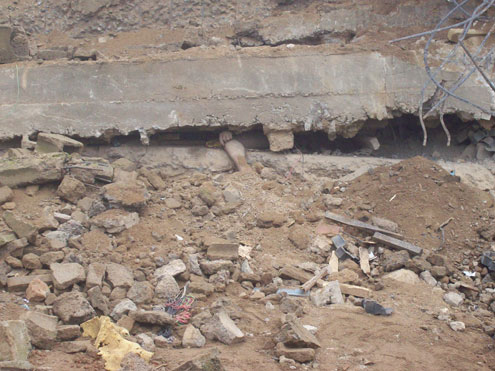 Disaster struck at about 5 a.m. today when an uncompleted three-storey building with a pent house proposed for a hotel collapsed, in Abuja, capital of Nigeria.

Seven bodies were brought out from the rubble while several victims were still trapped as at the time of filing this report. Only a few victims have been brought out alive.

The uncompleted building said to be abandoned for about 10 years now had been marked for demolition by officials of development control of the Federal Capital Development Authority (FCDA) following the return of the owner to site two weeks ago.

An official of the FCDA who spoke to P.M.NEWS at the site of the crashed building , said that after the return of the builders to site to commence work on the pent house atop the third floor,Â  they went and conducted a stilt â€˜hammer testâ€™ on the structure since it had been abandoned for a long time.

He said after the test, the FCDA found out that the structure was weak.

He further stated that following the failure of the structure to pass the stilt â€˜hammer testâ€™ the FCDA marked the building for demolition and ordered the people who were living in the uncompleted building to move out.

The collapsed building on Ikole Street, a residential area in Area 11 Garki district, Abuja, had at least 50 occupants, mostly labourers and street hawkers.

At least 30 of the residents were said to be trapped in the building as at the time it collapsed.

Some of the occupants who returned this morning said they abandoned their â€˜homeâ€™ yesterday night after they heard some creacking noise and plaster of dust and sand falling in their rooms. But others stayed behind and were still trapped underneath the rubble as at the time of filing this report.

Rescue operation was ongoing as at press time.