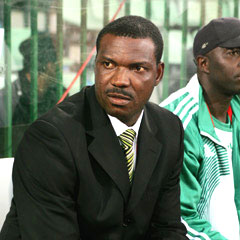 It was a continuation of the dismal performance of the Nigerian team at this yearâ€™s FIFA World Cup held in South Africa last month, where they crashed out in the first round.

The Coach Austin Eguavoen-led Eagles conceded the first goal in the 17th minute of the first half while Osaze Odemwingie equalised with a powerful header in the 25th minute.

Korean goalkeeper, Lee Woonjae, was substituted after conceding the goal from Osaze. The Korean keeper finally bowed out of international football at the age of 37.

Nigeria, in an attempt to increase the tally, failed barely a minute to the break when the Koreans grabbed the ball in their area.

Although the match was a friendly, the Eagles were not inspiring in their approach to the tie, but their hosts, Korea were tactically better.

Korea paraded 13 of the players they featured in the World Cup, while Nigeria presented few of their World Cup stars.

Eguavoen, who led the Eagles to Seoul as Caretaker Coach, was apparently unhappy with the result of the match, as he left the stadium a sad man.

However, Coach Cho Kwang-rae had his debut game as Koreaâ€™s handler on a winning note.

Nigeria forced Korea to a draw during their World Cup group match in South Africa in June.