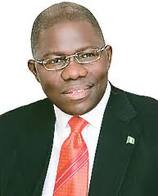 The president swore in the new ministers before the commencement of todayâ€™s meeting of the Federal Executive Council (FEC).

Though no reason was adduced for Babalolaâ€™s redeployment by the President, it was widely believed that the Oyo State-born politician ran into trouble when he said some weeks ago that the Nigerian National Petroleum Corporation, NNPC, was insolvent and cannot fulfill its financial obligations. He made the assertion at the meeting of Federal Account Allocation Council (FAAC).

The other newly sworn-in ministers who are members of ANPP were appointed in tune with the Government of National Unity,GNU, arrangement on the basis of the recent deal their party struck with the ruling Peopleâ€™s Democratic Party, PDP.