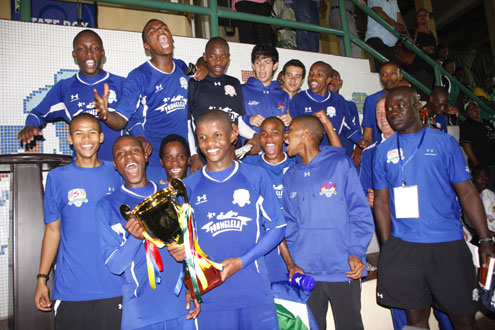 The decline in Nigerian football was exposed at the recently concluded Lagos International Youth Cup held at the Teslim Balogun Stadium, Surulere, Lagos,Nigeria.

At the end of the tournament sponsored and hosted by the Lagos State government through the Ministry of Sports, hosts, Lagos United, who were made up of players invitedÂ  from the last Principalsâ€™ Cup, lost all their matches in the tournament.

The competition, which drawn young players in the U-17 age bracket from Ghana ( Liberty Academy), South Africa (SuperSport United)Â  and The Netherlands (FC Utrecht), was won by the South African team.

It was evident that Nigerian football has in the past few years been living on borrowed time with lots of age discrepancies which climaxed last year, when the country hosted the FIFA U-17 World Cup.

Former Nigerian international, Adokiye Amasiemeka, had alleged that captain of the sliver winning Golden Eaglets, Fortune Chuwkudi, wasnâ€™t within the age stipulated for the tourney. But the world football governing body, FIFA, was quick to debunked the claim, describing it as unfounded.

FIFA disclosed that it carried out Magnetic Resonance Imaging (MRI) test on the players, which revealed that none of the Nigerian playersÂ  was above the stipulated age bracket.

Although, Lagos United may have ended the tournament without winning any match, the state government is believed to be on the right path of discovering players within the age bracket that can successfully hold theirÂ  own in the youth tournaments.

Observers believe it is high time Nigerian football do away with the syndrome of winning at all costs with the use of players above the age limit in any age grade tournament.

P.M. Sports gathered that the government of Babatunde Raji Fashola mandated the technical crew of Lagos United to parade true U-17 players.

The weeklong competition might have come and gone, but the lessons learnt would hunt Nigerian football administrators if they fail to learn from the shortcomings of the tourney.

It was evident at the end of the youth tournament that Nigeria does not have theÂ  developmentÂ  programmes on ground. Or how else does one describe a situation, where a team was hurriedly put together within three weeks to face teams that were well organised?

For instance, coach of the eventual winners of the SuperSport, Kaitano Tempo, said that in South Africa, they have laid down structures, where training is given to players from their tender age to becomeÂ  world stars. He disclosed that when they got the invitation for the tournament they were unshaken because they were well prepared.

He said that what they normally do is to train young footballers and graduate them to the next level soÂ  that there would be synergy and understanding in the team.

According to him, â€œfootball to us is about the passion, but we donâ€™t just participate in competitions for the fun of it. We have structures on ground in our club. What we do is we groom young footballers and transform them toÂ  a formidable team. The longer the players stay together the better they become. This paid for us in the Lagos Youth Cup. You can see that we have a good team.â€

The fallout of the Lagos International Youth Cup revealed that Nigeria is blessed with budding talents, but the country is yet to come to terms with the need for football academies, where they can young playersÂ  from a pool of players.

There are football academies and clubs scattered all over the nation, but the question is, do they really ascertain the real age of their players? Do they have the structures needed for an academy? How competent are the coaches training these players?

However, the Nigeria Football Federation, NFF, is not doing much to help football grow in the country. The FA has not done much to discover talents at tender age. The NFF is supposed to have a scouting department, which will be saddled with the responsibility of discovering young talents and grooming them to become world stars. Instead, the NFF prefers ready made materials from the local league to feature in age grade competition.This attitude has sent football in Nigeria to the woods.

However, kudos should be given to coach of the Golden Eaglets, Monday Odigie, who was at the venue of the tournament at the weekend. The former Bayelsa United soccer tactician told P.M Sports at the end of the final match that though he was in dire need of young players to fortify his team, he could not pick any of the Lagos United players toÂ  join the Eaglets in their preparation for Rwanda 2011 Africa Junior Champion, AJC.

He stressed that he is yet to have a formidable team but would rather make do with the materials at his disposal instead of inviting players from the Nigeria Premier League or professional clubs in the country.

He opined that even if he fails to qualify Nigeria for the AJC, Nigerians would see a set of footballers, who are truly U-17.

According to the coach, who assisted John Obuh at the Nigeria 2009 U-17 World Cup,Â  â€œas a coach, I donâ€™t like mincing words, Iâ€™m yet to have a strong team but my players are beginning to blend.Â  I want to promise Nigerians that even if we donâ€™t qualify for the AJC, we would have something to cheer aboutÂ  because Iâ€™m parading a true U-17 team that would rule the world in the near future.â€