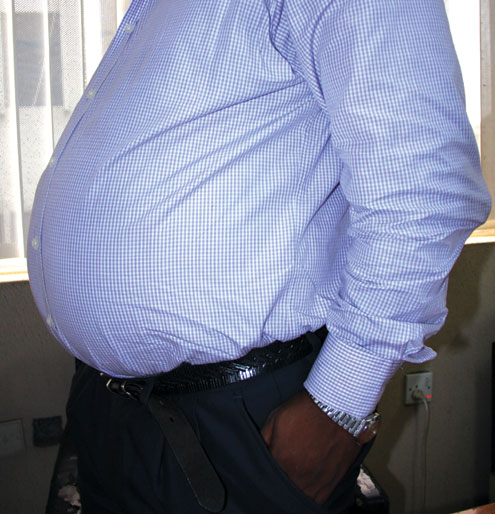 â€¢A man with a bulging belly

Nigeriaâ€™s prosperous class should beware: the protruding tummy that people erroneously equate with affluence and comfort, may be your pouch to early death. Scientists for long have warned that a panoply of germs occupies such â€˜pregnant tummiesâ€™, with grave implications for the well-being of the owners. Now a new study has confirmed the medical view about the â€˜pot bellyâ€™, with a warning thatÂ  â€˜the pot bellyâ€™ can be deadly for older adults, even those who aren’t overweight or obese by other measures.

According to a report by Reuters, oneÂ  of the largest studies to examine the dangers of abdominal fat suggests men and women with the biggest waistlines have twice the risk of dying over a decade compared to those with the smallest tummies.

Surprisingly, bigger waists carry a greater risk of death even for people whose weight is “normal” by the body mass index, or BMI, a standard measure based on weight and height.

“Even if you haven’t had a noticeable weight gain, if you notice your waist size increasing, that’s an important sign,” said lead author Eric Jacobs of the American Cancer Society, which funded the study. “It’s time to eat better and start exercising more.”

Bulging bellies are a problem for most Americans older than 50. It’s estimated that more than half of older men and more than 70 percent of older women have bigger waistlines than recommended. And it’s a growing problem: Average waistlines have expanded by about an inch per decade since the 1960s

To check your girth, wrap a tape measure around your waist at the navel. No fair sucking in your bulge. Men should have a waist circumference no larger than 40 inches. For women, the limit is 35 inches.

The new study, appearing in Monday’s Archives of Internal Medicine, is the first to analyze waist size and deaths for people in three BMI categories: normal, overweight, and obese. In all three groups, waist size was linked to higher risk.

About 2 percent of people in the study had normal BMI numbers but larger than recommended waists. Jacobs said the risk increased progressively with increasing waist size, even at waist sizes well below what might be considered too large.

The researchers crunched numbers on waist circumference, height, and weight to draw conclusions about who was more likely to die. Study participants measured their own waists, so some honest mistakes and wishful fudging could have been included, the authors acknowledged.

Four extra inches around the waist increased the risk of dying from between 15 percent to 25 percent. Oddly, the strongest link â€” 25 percent â€” was in women with normal BMI.

People with bigger waists had a higher risk of death from causes including respiratory illnesses, heart disease, and cancer.

The study was observational, a less rigorous approach that means the deaths could have been caused by factors other than waist size. But the researchers did take into account other risk factors for poor health, such as smoking and alcohol use.

Some older adults gain belly fat while they lose muscle mass, Jacobs said, so while they may not be getting heavier, they’re changing shape â€” and that’s taking a toll.

A tape measure, or a belt that doesn’t buckle the way it used to, “may tell you things your scale doesn’t,” Jacobs said.

Fat stored behind the abdominal wall may be more harmful than fat stored on the hips and thighs. Some scientists believe belly fat secretes proteins and hormones that contribute to inflammation, interfere with how the body processes insulin, and raise cholesterol levels.

But Dr. Samuel Klein, an obesity expert at Washington University School of Medicine in St. Louis, is skeptical about that theory. Removing belly fat surgically doesn’t lead to health improvements. That may mean it’s simply a stand-in for some other culprit that is causing both belly fat and poor health. Klein wasn’t involved in the new research.

Klein said the new study, while showing a link between waist size and mortality, doesn’t pinpoint exactly how much belly fat is dangerous for normal, overweight, and obese people. The 40-inch for men and 35-inch for women cutoff points are irrelevant for many people, he said.

What can be done to fight belly fat? It’s the same advice as for losing weight. Eat fewer calories and burn more through walking, bicycling, and other aerobic exercise. “Sit-ups are useless,” Klein said.