Biyi Adesida Emerges As New Deji Of Akure, Gets Letter Of Appointment 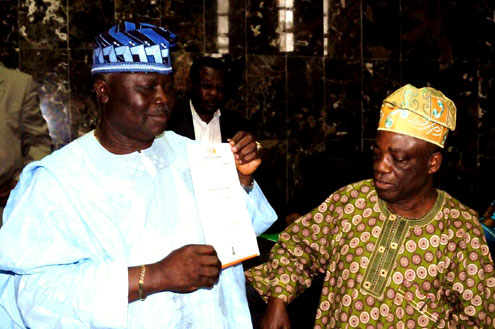 The new Deji of Akure, Adebiyi Adesida receiving his Letter of Appointment from the Ondo State Deputy Governor, Alhaji Ali Olanusi at the Governorâ€™s Office in Akure on Thursday.

Prince Adebiyi Adegboye Adesida has been formally endorsed by the Ondo State Government as the new Deji of Akure. AÂ  letter of appointment was given to him todayÂ  by the Deputy Governor of Alhaji Ali Olanusi, who advised him to bring all the contestants to the throne together and work for the peace, progress and development of Akure and Ondo State.

In his response, the new Deji, Adebiyi Adesida gave an assurance that he would use his office
to bring back the glory of Akure.

Speaking at a Press Conference jointly addressed by the Commissioner for Information, Mr. Ranti Akerele, and the Commissioner for Local Government and Chieftaincy Affairs, Prince Diran Iyatan, Mr. Akerele said â€œthe selection has been found by government to be in compliance with the relevant provisions of the Chiefâ€™s Law as well as the Deji of Akure Registered Declaration 1991. Government has therefore appointed Prince Adebiyi Adegboye Adesida as the Deji-Elect.â€

The Deji Stool became vacant on the 10 June following the deposition of the former occupant, Prince Adepoju Adesina.

Akerele said the selection process commenced on the 15th of June at the instance of the Executive Council of Ondo State.Â  The Executive Council had on that day directed the Commissioner for Local Government and Chieftaincy Affairs who in turn directed the Akure South Local Government Area authorities to contact the relevant ruling house to begin selection process.

Akerele said: â€œThe Ojijigogun Ruling House was by a letter from the Akure South Local Government Area on the 29th July, 2010, asked to embark on the selection process.

â€œThe Ruling House, after other preliminary meetings, met on the 11th of August and selected Prince Adebiyi Adegboye Adesida. â€œThe Secretary to the Akure South Local Government Area as the Secretary to the Committee on selection forwarded his report to the appropriate channel which came up before the Executive Council as a memo this afternoon.

â€œThe memo was approved by the Executive council in a unanimous decision.â€