Jonathan Slammed Over Luxury Jets, As Road, Power, Health Sectors Are In Shambles 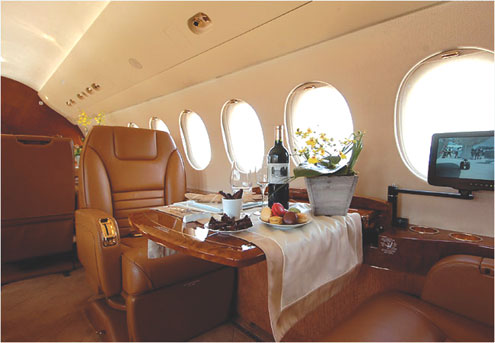 â€¢The interior of the Falcon jet

President Goodluck Jonathan was the butt of criticisms this morning over the decision by his administration to splash $155 million, in one fell swoop,Â  on three luxury jets,Â  at a time when the nation is immersed in fresh mounting debts and when roads, health and electricity facilities are in appalling states.

Yesterday, the Federal Executive Council approved the purchases for two Falcon 7X jets and one Gulfstream G550, against the backdrop of a flight hitch Jonathan suffered on his return to Nigeria from the African Union Conference in Kampala, Uganda. The three jets will be delivered between the end of this year and next year, bringing the presidential fleet to seven. Each of the Falcon model cost $51 million, while the Gulfstream, a popular choice of the worldâ€™s rich, cost $53 million. From P.M News internet searches, the three jets appear not to be overpriced as the government approved prices fell within the range quoted on the web sites of the manufacturers.

But critics are not assuaged by this seeming transparency, as they question the presidentâ€™s approval of such a binge buy for aircraft at this time when the nation has even chosen to borrow about $600 million to register voters and $3.5 billion to build a new electricity grid, nationally.

The outgoing President of the Nigerian Bar Association, NBA, Mr. Oluwatosin Rotimi Akeredolu, asked: â€œWhat happened to the presidential fleet? Former President Obasanjo bought one. If N21 billion is to be expended on presidential jets, then thatâ€™s not money well spent. But one has to be sure because jets are not something you buy every day,â€ Akeredolu said.

â€œIf purchasing three presidential jets means increasing the number of jets in the fleet, thatâ€™s not good spending. It is important Nigerians should know what happened to the other ones previously in use. To change the whole fleet will be wasteful,â€ Akeredolu submitted.

Rights activist and publicity secretary, Afenifere Renewal Group, ARG, Mr. Yinka Odumakin described it as extreme form of profligacy which showed that the president does not have his priorities right.

Odumakin said: â€œAt a time they (government) went to borrow money to conduct elections, when education is in shambles. It shows he (Jonathan) is not showing good leadership example. Since he came into office, it has been one profligacy or the other beginning with celebrating his one hundred days in office, N17 billion voted for the celebration of Nigeriaâ€™s 50th independence anniversary, the billions of naira budgeted for Abuja airport runway project, among others.â€

He condemned the presidentâ€™s spending spree, stressing, â€œit shows that he is far removed from the people.â€

Odumakin pointed out that the same presidential jet used by the former president of the US, Mr. George Bush was the same jet presently in use by President Barack Obama but it was well maintained by successive presidents in about 30 years.

In the case of Nigeria, Odumakin regretted that nobody was willing to maintain the presidential jets but acquiring new ones was their priority.

He posited that some world leaders like the Prime Minister of Britain do not fly a presidential jet. Instead, he travels in public planes.

But constitutional lawyer and rights activist, Prof. Itse Sagay defended the purchase, arguing that an expenditure of N21 billion was not a big money especially if we think of Mr. Presidentâ€™s safety.

Prof. Sagay said:Â  â€œhonestly, we have to think of the safety of the president. We all know what happened to him recently in Uganda when his plane developed fault. He had to turn back.

â€œWith Nigerian money, itâ€™s not a big money. The money is not up to one third of what was approved for Jega for elections. When we view it that the presidential jet is not for the president alone, I think itâ€™s a reasonable expenditure.â€

The Gulfstream G550, which goes for $53 million, is a breathtaking luxury in the air. The manufacturers describe the 18-seater jet as more than just a flagship. â€œIt is arguably the worldâ€™s most versatile and stylish ultra-long-range jetâ€.

It also boasts of power and efficiency that can travel halfway around the world from New York to Tokyo easily.

The cockpit of Gulfstream G550 is fully stocked with state-of-the-art technology to both aid and protect the pilots and to enable them navigate in most weather conditions. And when the weather turns bad, the Gulfstream Enhanced Vision System (EVS) is included as a standard item on the 500.

The two new Falcon 7x to be supplied by Dassault Aviation of France, is also another luxury on air. Each of the aircraft could convey eight passengers. It is described as â€œa proven, reliable power plant with the latest technological advances. It has other outstanding features that make it stand out as a jet of choice for the rich.

Dassault, the manufacturer touts the Falcon 7X as a jet â€˜that changes the playing field for business jet manufacturersâ€™ operators and pilots.

â€˜The Falcon 7X is perhaps the most coveted ultra-long range private jet in all of Europe and flies faster, further and higher than its predecessors.

â€˜It is the largest Falcon tri-jet business aircraft produced, and Dassault states that the Falcon 7X is the worldâ€™s first fly-by-wire business jet

Configured to carry eight passengers and four crew (three pilots and a flight attendant), the Falcon 7X has an exceptionally long range (10,556km – 5,700nm) allowing one to fly from London to Tokyo or Los Angeles nonstop with a top speed of nine hundred kilometers an hour.