How To Tie Scarf In Fashionable Ways 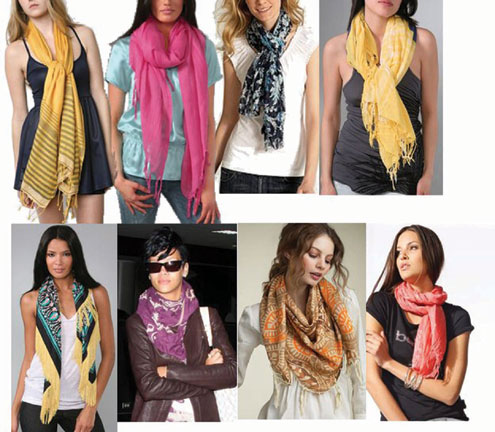 When it comes to accessorising that special outfit, the scarf is the one item you want to have in your wardrobe. The scarf is the perfect accessory as it can add pizzas to any outfit from the perfect little black dress to a business suit or your favourite T-shirt and jeans outfit. The scarf can add a sensational look making even the plainest outfit into a fabulous fashion hit. You should try to have a variety of scarves such as the pashmina, cashmere, fleece, silk and the scarf belt, then you will be ready for any occasion.

Tying a Scarf to Make a Hair Accessory and Keep Your Hair Style in Place
A large square scarf can be folded in half forming a triangle that can then be tied around your neck loosely to hang dramatically off one shoulder. Then of course there is always the head that can be covered with the larger square scarf. Hold your hair in place while riding in your convertible by using a light weight chiffon or silk scarf. You can either tie the scarf in front under your chin or try tying it in the back of your head. A smaller scarf can also be folded to a create an hair ban. Another way to wear the square scarf is as a Turban. Fold the square into a triangle and fold edge under over the forehead. Take the two ends to the back and cross them over each other bringing them again to the front to tie on top of the head. You can then tuck in the ends or any loose fabric and adjust as you desire. Be creative with your scarf tying and have fun trying out the many different ways to wear your fashion scarves.

Four Quick Ways To Tie A Long Scarf
Long is in when it comes to scarves. Here are four quick and simple ways to tie a long scarf. To prepare a square scarf for tying, women can fold the scarf along the bias to create a triangle. They can then begin loosely rolling the long side of the triangle toward the point.

The European Loop
Thereâ€™s a quick and casual way to put on a scarf without even tying a knot. This look works well with any outfit and can be used to secure thin silk as well as heavier scarves.

â€¢Fold scarf in half lengthwise.
â€¢Drape the folded scarf around the neck so two loose ends hang down on one side and the fold on the other.
â€¢Bring the two loose ends through the loop created by the fold.
â€¢Use ends to pull the scarf to a desired tightness.
â€¢Wear ends hanging to the side or in the middle.

Tying Scarves with a Simple Knot

This tie creates a fashionable criss-cross knot that looks great with any outfit.

â€¢Fold scarf in half lengthwise.
â€¢Drape the folded scarf around the neck so two loose ends hang down on one side and the fold on the other.
â€¢Bring one loose end through the loop created by the fold.
â€¢Bring the other loose end over and then through the opposite side of the loop.
â€¢Use ends to adjust the scarf until the knot hangs at the desired length.
â€¢Wear ends hanging to the side or in the middle.

Tying Scarves with Slip Knots
There are two slip knots that are quick and fashionable ways to secure a scarf. Both can dress up a collared shirt or lend some extra flare to a casual crewneck.
â€¢Â Â  Â Drape the scarf around the neck with one end longer than the other.
â€¢Â Â  Â Wrap the long end in front and behind the short end twice.
â€¢Â Â  Â Bring the long end up through the gap between the scarf and neck toward the chin.
â€¢Â Â  Â Then, pass the long end down through the loop on the very front of the knot so it hangs directly in front of the short end.
â€¢Â Â  Â Use ends to adjust the scarf until the knot hangs at the desired length.
â€¢Â Â  Â Wear ends hanging to the side or in the middle.

Finally, hereâ€™s one more slip knot thatâ€™s even simpler than the first.
â€¢Â Â  Â Drape the scarf around the neck with one end longer than the other.
â€¢Â Â  Â Tie a loose half knot in the long end.
â€¢Â Â  Â Pull the short end through the loop of the half knot.
â€¢Â Â  Â Use the ends to adjust the scarf until the knot hangs at the desired length.
â€¢Â Â  Â Wear ends hanging to the side or in the middle.

A long scarf is incredibly versatile. What other accessory could completely change the look of an old or drab outfit in a matter of seconds? And, believe it or not, these four ways to tie a scarf are just the beginning. Scarves can be worn in the hair, over the shoulders, and dressed up with pins or necklaces.