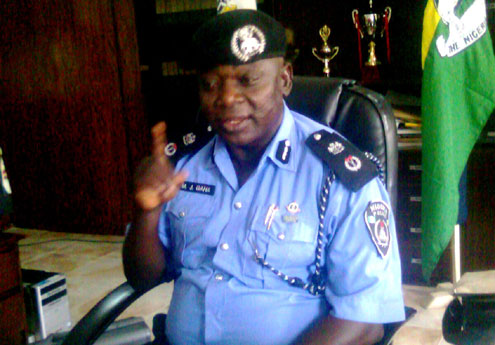 A Nigerian police Sergeant Ibrahim Abdullahi attached to Bebeji Police Division in Kano , North-West Nigeria , Saturday committed suicide by killing himself with his gun, after an aborted attempt to kill his boss.

The Police officer who allegedly stoleÂ  about 300 US dollars from a shop near the police station did not want to die alone as he shot the Divisional Police Officer, DSP Abdullahi Umar, on the shoulder, believing that his boss had died.

The DPOÂ  is being to treated at Malam Aminu Kano Teaching Hospital, AKTH.

The bullet wounds on the DPO were not severe and he has chances of surviving, Kano Police spokesman, Superintendent of Police, Baba Mohammed Azare who confirmed the story told P.M.News.

â€œThe story was a sad one for the Nigeria Police as it could be best described as a tale of a crime-buster soaking his hands in the rubbish of crime,â€ a resident of Bebeji who was at the scene of the incident said.

Trouble started when the late Sergeant Abdullahi allegedly notorious for intimidating residents of the area visited a shop owned by one Hajiya Hadiza Yahuza.

P.M.News learnt that the late Police man was in the habit of extorting money from the woman, whose shop is near the station.

According to sources, when he came into the shop, he met the shop keeper, Dauda Buhari, 16, who told him that his Madam was yet to come to the shop.

The teenager who knew Sergeant Abdullahi as a regular visitor to the shop innocently left him inside to attend to a customer who came to buy wares, â€œbut that was to be a costly mistake as the Police man opened the money box and collected the sum of N50, 000,â€ our source stated.

â€œBy the time he came back from outside, Sergeant Abdullahi excused himself and left; but when Dauda searched the money box, he realized that the sum of N50, 000 was missing.

â€œDauda ran after the Sergeant and inquired from him whether he knew anything about the missing money. An argument ensued and the Sergeant tried to intimidate the shop keeper,â€ our source narrated further.

P.M.News learnt that it was at this time that the DPO who was sitting under a tree near the police station stepped in.

â€œThe DPO invited both of them. After listening to their stories, he ordered the Station officer, Inspector Abdullahi Mohammed to disarm Sergeant Abdullahi and investigate the case.â€

The Station Officer carried out the instruction but Sergeant Abdullahi tricked him on the pretence that he was going to urinate, â€œonly for him to sneak into the station and deceived the man in charge of fire arms.

â€œHe told the man at the arms store that the issue had been resolved and the Inspector instructed that his gun should be given to him.

â€œDramatically, he stormed out from the station, cocked his gun and fired at the DPO.

â€œThe station became rowdy as officers and people ran helter-skelter. He seized the rowdy situation and shot at himself and he died instantly,â€ our source narrated.

But it was later to be established that the late Police Sergeant actually stole the money,â€ our source revealed.

Police has launched full investigation into the case, the Police image-maker stated.

The sergeant is yet to be buried as he would be sentenced and dismissed after the post-humous investigation.

On 12 August, in the same city, anotherÂ  Sergeant of MOPOL 9 shot into a crowd, wounding three.