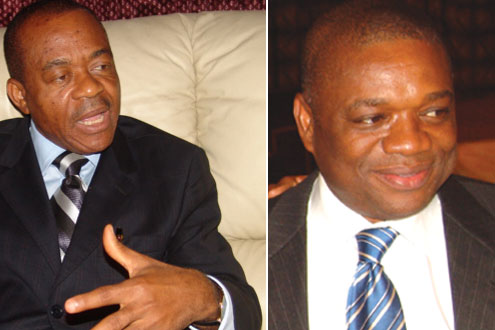 The battle for the Abia state Government House which had been ongoing between Governor Theodore Ahamefule Orji and Dr. Orji Uzor Kalu, former governor of the state and erstwhile Chairman, Board of Trustees of the Progressive Peoples Alliance, PPA, has assumed a different dimension following the institution of a suit by a People’s Democratic Party stalwart in the state challenging the plot to have the Abia State Governor run for a second termÂ  on the platform of the PDP.

Sir Reagan Ufomba, a one-time Special Adviser under Uzor Kaluâ€™s administration in the state had approached an Abuja court to challenge the dissolution of the partyâ€™s Executive Council in the state by the partyâ€™s National Working Committee in fulfillment of part of the conditions given to the party by Governor Theodore Orji for him to decamp to the party for the 2011 general elections.

The court had last Wednesday ordered parties in the suit to maintain the status quo pending the hearing and determination of the motion on notice.

Ufomba, who recently reconciled with Uzor Kalu whom he served as a Special Assistant, had earlier made three attempts for the partyâ€™s ticket in the state and had been unsuccessful.

He approached the court to prevent PDP from surrendering its platform to Governor Orji who he claims is not a registered member of the party.

The plaintiff, through his counsel, Mr. Paul Eshiemomoh, asked the court to determine whether he, as a member of PDP, has the right to approach the court for intervention in what is clearly an abuse of the partyâ€™s constitution.

He averred that as a financial member of the party he has the right to enforce his constitutional rights.

Ufomba argued that Article 7 (1) to (9) of the PDP Constitution promotes the political interest of members but that the attempt by the National Working Committee of the party to draft in Governor Orji as the partyâ€™s candidate in the forthcoming election infringes on his political interest and wonders why the party leadership would trample on a memberâ€™s rights and interest to satisfy a â€œprodigal son and a political bastardâ€ who has no evidence of membership of the party.

The imposition of Governor Orji, he argued, is a violation of the partyâ€™s laws and an infringement on his own political interest and rights.

Governor Orji recently issued some conditions to the party leaders at the partyâ€™s National Secretariat which must be fulfilled for him to decamp to the party.

The National Working Committee of the party on the 4th of this month dissolved the Abia State Executive of the party in fulfillment of part of the conditions preparatory to the formal decamping of the governor to PDP.

PDP, represented by Chief Ajana, in a preliminary objection filed by the party, urged the court to dismiss Ufombaâ€™s suit.

The party contended that the reliefs being sought by the plaintiff cannot be entertained by the court and that no court has the power to meddle in issues of nomination and sponsorship of candidates for an election.

Chief Ajana argued that the only condition under which the court can step into the issue is if a candidate in being substituted, wherein the court must insist on a cogent and verifiable reason as espoused in the Electoral Act 2006 but that the current issue in the party at the state is entirely on a different pedestal.

Furthermore, the lawyer told the court that the plaintiff has not yet exhausted the internal mechanisms for the resolution of conflicts in the party before he dashed to court and as such had violated the provisions of the same constitution which he said he wants to protect.

He urged the court to dismiss the suit.

Justice Peter Kekemeke adjourned till 20 August to rule on the preliminary objection.