CHECKPOINTS OF DEATH: When Will Onovo Stop This Carnage? 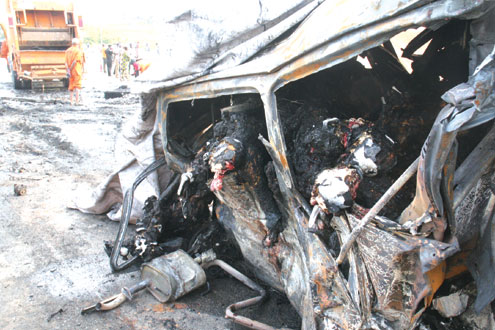 â€¢Top Photo: L-R: Scenes of the accident in Lagos that sent shock waves round the world. PHOTO: OLATUNJI OBASA.

Nigerians have expressed their anger over the carnage policemen always cause at checkpoints on the nationâ€™s highways and they are asking when the Inspector-General of Police, Ogbonna Onovo, will call his men to order and dismantle the checkpoints.

The outrage came in the wake of another avoidable tragedy caused by a police checkpoint mounted on the Lagos-Ibadan expressway yesterday.

The accident left over 25 people dead, some burnt beyond recognition. Several vehicles were also burnt.

According to eyewitnesses, immediately the accident occurred, the policemen who mounted the road block fled the scene and were pursued by people around the scene but the cops managed to escape.

At the time of writing this report, the policemen had not been fished out by the Lagos State Police Command. Some of the witnesses said the policemen came from Isheri Police Station while some claimed they were a team from the Rapid Response Squad, RRS.

The officer said the information they had was that the truck driver was on top speed, lost control of the vehicle and it rammed into a commuter bus. The impact, according to him, was what caused the fire outbreak that ignited other vehicles.

The Police Public Relations Officer for Lagos State Command, Frank Mba, also debunked the claim by eye witnesses that the incident was caused by the police.

â€œYou know that where the incident took place is a slope and it is a disaster for any vehicle to lose its brake in that kind of place.

â€œThere was no policeman at that place before, during and after the incident. We do not know why people are going about with such stories. That conclusion is hasty and unnecessary. We are investigating and after our investigation, we will come out with our findings,â€ Mba said.

But eyewitnesses would not agree with Mba. A driver identified as Rasheed Adeniji explained how the incident happened.

â€œ We were again in a serious traffic here on this spot this morning where the police officers usually collect N20 from us and pursue people coming with second hand cars. All of a sudden we just heard a big bang at the back. Before I knew it fire had engulfed the whole place.

â€œI quickly ran out of my vehicle and ran to the other side where I saw a trailer that rammed into the long queue of vehicles waiting to be cleared by the police officers. People started running helter-skelter. I looked around here and there and did not see the conductor, my own brother.

â€œI rushed back to the bus and which at this time was in flames with many other vehicles. I started shouting for help from people to rescue my passengers, about 18 of them, including my brother. As I am talking to you now, they could not come out, they all burnt to ashes.â€

Another survivor, Isaac Ejiwere, said, â€œI heard bashing of cars from behind. When I got out of the vehicle to observe what was happening,Â  suddenly I saw a trailer engulfed in fire. We managed to escape.

â€œWe would have been like one of these ones, if not for God. My vehicle is burnt beyond recognition and the car behind me over there has the charred body of a person trapped inside. What baffles meÂ  most is the fact that the policemen who mounted this road block disappeared immediately the accident happened.â€

Another eyewitness, who gave his name as Christian, said a five year-old boy and his mother died in the tragedy.

â€œThe woman, who was driving the vehicle cried out to people to rescue her son. But nobody could go near the vehicle as the fire was intense.â€

Accidents caused by police checkpoints across the country are numerous and the authorities as well as the inspector general of police donâ€™t seem to be bothered about bringing the culprits to book.

The name of the mobile policeman was later given as Gideon Adepoju. The policemen were said to be chasing a defiant commuter bus driver who failed to stop at a checkpoint mounted close to a sharp bend. While the bus driver escaped, the policemen lost control and hit the principal.

Similarly, confusion reign on the streets of Effurun and Warri, Delta State on 14 August, 2007 when a lorry ran over an okada rider near a police checkpoint. What actually transpired between the lorry driver and the policemen could not be ascertained.

Four others were killed in similar circumstances in Effurun. Okada riders, therefore, went on the rampage in Warri and Effurun to protest the killing of their colleagues.

On 14 July, 2009, five students of Government Secondary School, Tunjga, Maji were killed while travelling on the Zuba-Gwagwalada (Abuja)-Lokoja road.

Reports said a police van gave their bus a chase after the driver allegedly failed to stop at a checkpoint. But the studentsâ€™ bus ran into a gully on the road and crashed. Four policemen on the chase also sustained injuries.

The Abuja-Lokoja highway was blocked for more than three hours after the accident as students of College of Education, Zuba protested the killing of the students who were said to be goingÂ  for the end of their schoolâ€™s session prize giving day ceremony when the accident occurred.

Motorists protested the accidents when they blocked the Onitsha-Enugu road for many hours. The peaceful protest was later resolved by a joint team of policemen and the military.

However, the state Police Public Relations Officer, PPRO, Emeka Chukwuemeka, denied the loss of lives in the accident.

As a result of the accident, the Senate Committee on Police Affairs summoned the Inspector-General of Police, Mr. Ogbonna Onovo, the AIG Zone 9, Umuahia, Hafiz Ringim and the state Police Commissioner, Philemon Leha, to appear before it in Abuja.

In a SMS message to P.M.NEWS, Osanyintolu confirmed that 20 vehicles were burnt while several persons were burnt beyond recognition. 18 other casualties, he said, were taken to a trauma centre for attention.