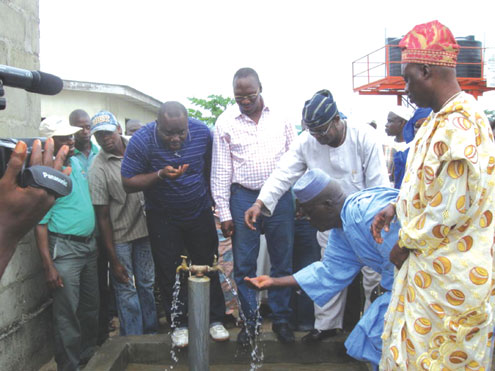 â€¢Commissioner for Rural Development, Prince Lanre Balogun (middle) and others drinking from a water project.

For years, residents of Aro, a remote village in Eti-Osa Local Government Area of Lagos State, South West Nigeria, have lived without potable water.Â Their means of survival was a well in the baaleâ€™s palace, where they queue up to fetch water for drinking and for other domestic uses.

Reprieve, however, came their way when the Lagos State Ministry of Rural Development provided them with a Modified Type A small scale water project to serve the entire village.Â  Now, they no longer go to the baaleâ€™s palace to fetch water as it is right in their domain.

â€œWe are very excited about this water project. Before now, we depended on well water which is coloured. We can only get the well water from the baaleâ€™s palace, but today, we are happy,â€ said Mrs. Olabimpe Abosede, a resident of the village.

Also, for Museyo Village in Ibeju-Lekki Local Government, the power supply from the Power Holding Company of Nigeria (PHCN) Plc has been very erratic. To worsen the situation, the current was always low, making even the light provided by the power company useless.

Last week, a rural electrification project was handed over to the community to boost the power supply from PHCN in the area.

According to Mr. Gbenga Ogunnaike, â€œthe provision of 500 KVA transformer to the community is a welcome development.Â Prior to this time, the light being provided to us by PHCN was very bad as the current was too low, but with this transformer, people have started moving in to complete their houses.â€

These are just few cases of rural dwellers, whose lives have been impacted upon through the provision of social amenities by the Lagos State Government as over 500 projects were handed over to rural communities cutting across the five divisions of the state.

Last week, the Commissioner for Rural Development, Prince Lanre Balogun, led a team of government officials to hand over these projects located in remote villages across the metropolis to the jubilation of residents of the communities.

At times, the team had to wade through forests and bad roads to reach remote villages cut off from the cradle of development.

In Eti-Osa and Ibeju-Lekki local governments, for instance, several projects such as Modified Type A water projects; rural electrification and a Neighbourhood Watch Post were handed over to rural communities.

Special Adviser to the Governor on Establishment and Pensions, Mr. Adebanjo Olufemi, represented the governor in handing over the projects to rural communities in the two areas. He told the villagers that the projects were meant to bring development to them and ensure that they were not left out in the scheme of things in the state.

Commissioner for Rural Development, Balogun, said government believed that people in the rural and urban areas should have access to social amenities, adding that with the siting of rural electrification and water projects in rural areas, it would greatly help to curb rural-urban migration in the state and reduce the pressure off the city.

â€œThis is the reason why government is spending lots of resources to develop the rural areas in order to make it a lure and attractive for people to want to stay and work in rural areas.

â€œWe want to ensure that peopleâ€™s lives were touched. We have gone to the remotest part of Lagos State to site these projects. We have done a lot of interaction with them and provide what they need,â€ he said.

On maintaining the projects, Balogun said a team of engineers from the ministry normally go out to interact with the people in order to know which project needed attention and maintenance. He added that when the projects were handed over to the benefitting communities, the Community Development Associations (CDAs) were normally instructed to ensure the projects were maintained.

The commissioner said that the state government had adopted the Integrated Rural Development approach in tackling the numerous problems confronting rural communities across the state.

Mr. Shola Ogundare, a Neighbourhood Watch officer at Orile-Ilasan Village in Eti-Osa, said the post handed over to them would greatly enhance security in the area, saying that since the outfit now had a building to itself, it could plan and strategise on how to effectively tackle grassroots crime.

At the handing over of the projects, Balogun warned vandals against vandalising them as culprits would be adequately punished, adding that the Neighbourhood Watch officers had been drafted to areas where these projects were located to keep an eye on them and ensure that they were not vandalised by unscrupulous people.

He said the people had been enlightened to be their neighbourâ€™s keepers and watch over the property that belonged to the community, adding that the Neighbourhood Watch officers had been mandated to report any suspicious moves within the community to the police with a bid to nabbing criminals.

Balogun, however, said government was satisfied with the high level with which the projects were executed, adding that government was bent on delivering the dividends of democracy to the people.

Also, the state government had threatened to withhold payment to all contractors in the rural areas, whose performance had fallen below the expectation of government.

Twelve projects such as rural electrification, gari processing plant, world class jetty and neighbourhood watch posts were handed over to communities in the area.

Special Adviser to the Governor on Housing, Mr. Ajao Jimoh, noted that the projects were all part of the dividends of democracy of the government and a fulfilment of the electioneering campaign the governor made to Lagosians.Â  He appealed to them to make the best use of the projects and maintain them so that they would last long.

Jimoh added that government would be sad to come back only to discover that any of the projects were in bad shape and urged the people to pay their taxes, stressing that as long as they lived up to their obligations in this area, government would always provide their needs.

Chairman, Ifesowapo-Oluwakemi Community Development Association, Mr. Akinyan Olugbenga, whose community got water and rural electrification projects, commended the government for the gesture and assured that the community would protect the projects and prevent them from being vandalised as well as maintain them.

â€œThe state government had played its role in proving us social amenities, while the maintenance and security of the projects rest on us,â€ he said, while appealing to government to construct the main road to the community which had been dilapidated as well as construct the drainage.

â€œThese projects sited in rural areas will go a long way to checkmate rural-urban drift. They are meant to decongest the urban areasâ€ he stressed.

In Ojo Local Government, projects such as NW post, rural electrification, water and aquaculture were provided for communities in the area. The beneficiary communities are Idera, Adeniran Ogunsanya College of Education, Okokomaiko, Iba Secretariat, Iba Housing Estate and the Nigerian Army Housing Estate.

According to the Executive Chairman, Nigeria Army Post Service Housing Estate CDA, Captain Olu Baiyekusi (rtd), the community would not forget the gesture of the state government in providing them with a 500 KVA transformer, adding that the estate was meant to resettle men and women who had served the nation.

What is the rationale as to which project a particular community would get? Balogun explained that the Fashola-led administration, on assumption office in 2007, gave out forms to CDAs across the state to fill in their needs, saying that it was through this that government provided for the needs of the rural communities.