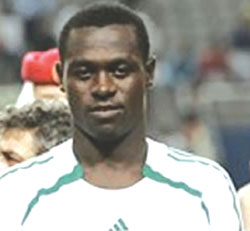 Nigeriaâ€™s only team left in the CAF Champions League, Heartland of Owerri may have found themselves in a tight position on Group B table after securing just a point from three games, but one of their players, Kingsley Udoh, is upbeat that they can still make it to the semi-final stage.

The Naze Millionaires, as Heartland are fondly called kicked off their campaign on a shaky note, when they played a 1-1 draw at the Dan Anyiam Stadium against Al Ahly of Egypt, although the Nigerians were already running away with a lone goal lead but gave the Egyptians a livewire.

After playing the 1-1 score draw, the coach Samson Siasia -tinkered side fell away to J S Kabylie of Algeria and also lost 0-1 to Ismaily of Egypt in Cairo last weekend.

With Heartland sitting comfortably on the bottom of the log with one point, Udoh, who just joined the team, is positive of their progress to the finals, believing that it is not over until the last whistle.

Udoh, a member of the victorious Golden Eaglets to South Korea 2007 FIFA U-17 World Cup, thinks that anything can happen. To him, football is not mathematics, where you can predict the outcome of a match.

He argued that all hope of Heartland qualifying for the semi final of the lucrative league is still bright.

The Owerri side must win their remaining matches if they want to advance to the last four of the money spinning CAF tournament.