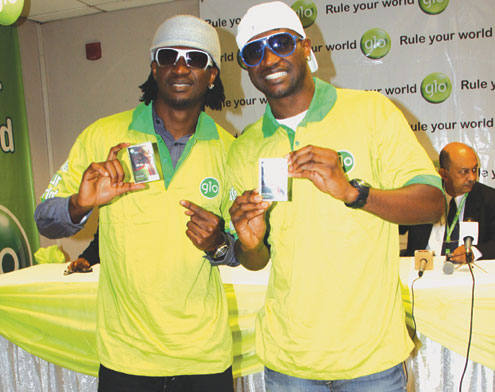 The multiple award-winning twin brothers were officially unveiled as the new ambassadors of the Mike Adenuga owned telecommunications outfit in Lagos yesterday, but the mouth-watering amount was not revealed.

An inside source privy to the four-year deal, however, revealed the amount involved to P.M. NEWS on condition of anonymity.

According to the Group Chief Operating Officer of Glo, Mr. Mohammed Jameel, the list of the companyâ€™s ambassadors could not be complete without P-Square, saying â€œthat is why we are proud to present them as the new Glo ambassadors today.â€

He said further that for some years now, Globacom has been watching with keen interest, the exploits of the Okoye brothers in the local and international music scene, and could not help, but include them on its list of ambassadors.

Reacting to the new deal, the E No Easy crooners expressed their joy and satisfaction, stressing that they would continue to play good music and make Nigeria proud.

The deal has further cemented the fact that P-Square is indeed the most successful Hip Hop group in Africa.

Just a few months ago, the group emerged the Best African Act at the coveted KORA All Africa Music Awards held in Burkina Faso. The award attracted the mouth-watering sum of $1million (N150million).

They recently returned from a very successful one and half months musical tour of the United States of America, which ended in New York City on 24 July, 2010.

The Okoye twins were born and raised in Jos, the capital of Plateau State, where they started stayed for theÂ  PepsiÂ  Football Academy. While they were in the senior team then, Chelsea FC of London and Super Eagles midfielder, John Obi Mikel, was in the junior team.

â€œI recall na football we been dey play wela, but couldnâ€™t get to the top of the game, so we gave up and we started entertainingâ€¦â€ P-Square revealed in one of its hit songs titled Super Fans.

They, however, started their music career as dancers, imitating the likes ofÂ  the late Michael Jackson, MC Hammer and Usher Raymond, until later when they decided to blend it with singing. The group had its first breakthrough when it emerged the winner of Benson and Hedges sponsored Golden Tones in 2002. Although the groupâ€™s first album titled Senorita got them KORA Awards nomination then, it was not enough to make them one the most sought-after in the country.

The breakthrough they needed, however, came in 2005 with the release of their second album titled Get Squared. The album had smash hit songs like Story, Get Squared, Busy Body, Temptation, Omoge Mi and E Don Happen among others. With the album, P-Square clinched all major awards in Nigeria.

In November 2007, their third album titled Game Over, hit the shelves, and like the second one, it was not short of expectation, as it contained monster hits like Do Me, Roll It and Ifunanya to mention a few.

Their fourth album with the title Danger, has served as the much needed icing on their cake. With wave making songs like E No Easy, Possibility, I Love U, Gimme Dat and Break It among others.

The duo have been so successful that even the President of Burkina Faso, whose country hosted the last KORA Awards, ordered that they should be flown in his private jet. Apart from this, P-Square has invaded so many homes, hearts and phones with their hit songs, which have either become a national anthem of sort on the lips of so many people and ring tones on so many phones.

Songs which have been adapted into popular ring tones include E No Easy, Possibility, Break It, I Love U and Do Me.

In the words of Peter, â€œyou canâ€™t talk about the success ofÂ  P-Square without making reference to the Senorita album because it introduced us to Nigerians. We conquered Africa with Get Squared and the subsequent albums have put us in the world map. So we thank God and our fans both home and abroad for everything.â€