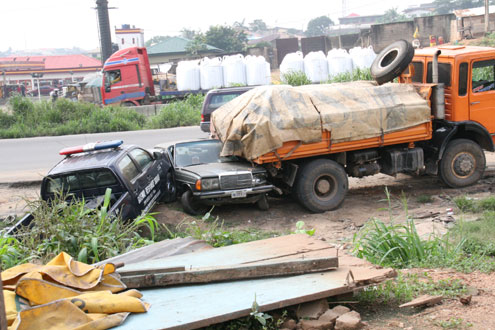 â€¢Scene of the accident at the police checkpoint this morning. PHOTO: OLATUNJI OBASA.

Barely a week after the accident caused by a police checkpoint in which 30 people reportedly lost their lives in Lagos State, SouthWest Nigeria, a police check point has caused another accident on the Lagos-Ibadan Expressway, near Berger bridge bus stop.

P.M.NEWS learnt that the accident occurred this morning when a truck with registration number XK 6351 SP was stopped by policemen at a checkpoint.

According to report, the Benz car was towed from Ibafo last week to the police checkpoint for repairs.

Some of the residents of the area, who spoke to P.M.NEWS condemned the action of the policemen who they alleged harass both motorists and passengers on the expresswayÂ  to extort money from them.

It was also gathered that two policemen narrowly escaped death last week at the same checkpoint when a truck lost control and ran into their shed.

As at press time, the truck, Mercedes Benz car and the police vehicle were still at the scene of the accident.