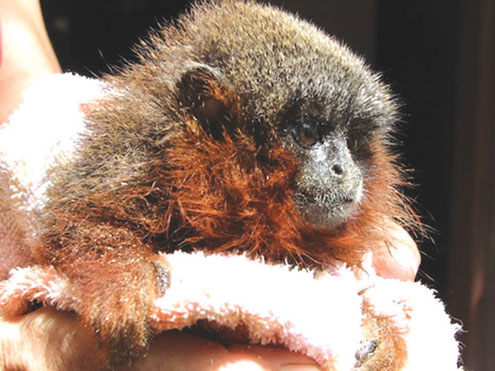 Scientists Thomas Defler, Marta Bueno, and Javier GarcÃ­a have discovered a new species of monkey in the CaquetÃ¡ region of southern Colombia. The region, which is part of the Amazon rainforest, had been inaccessible for years due to a violent insurgence.

The violence subsided three years ago, allowing GarcÃ­a â€” a native of CaquetÃ¡ â€” to explore the Colombian Amazon. Using a GPS to traverse the upper CaquetÃ¡ River, GarcÃ­a found 13 different groups of titi monkeys, which have a very complex call.

â€œThis discovery is extremely exciting because we had heard about this animal, but for a long time we could not confirm if it was different from other titis. We now know that this is a unique species, and it shows the rich diversity of life that is still to be discovered in the Amazon,â€ said Dr. Defler.

The Callicebus caquetensisis is about the size of a cat with grayish-brown hair, but is missing the white bar on its forehead common to other titis. Its most distinct feature is its bushy red beard. Unlike most primates, but common to all titis, they are monogamous with tightly knit families.

However, the news of this discovery is tarnished by the fact that the titi faces extinction. It is estimated that less than 250 CaquetÃ¡ titi monkeys exist. A healthy population would be in the thousands. The dwindling population is due to deforestation as its habitat has been used for agricultural land and oil and gas exploration.

â€œThis discovery is particularly important because it reminds us that we should celebrate the diversity of earth but also we must take action now to preserve it,â€ said JosÃƒÂ© Vicente RodrÃƒÂ­guez, head of science at Conservation International in Colombia and president of the Colombia Association of Zoology.

â€œWhen world leaders meet later this year in Japan for the Convention on Biological Diversity, they must commit to the creation of many more protected areas if we want to ensure the survival of threatened creatures like this in the Amazon and around the world.â€

With an extremely low population, the monkey should qualify as a critically endangered species according to the International Union for Conservation of Nature (IUCN).