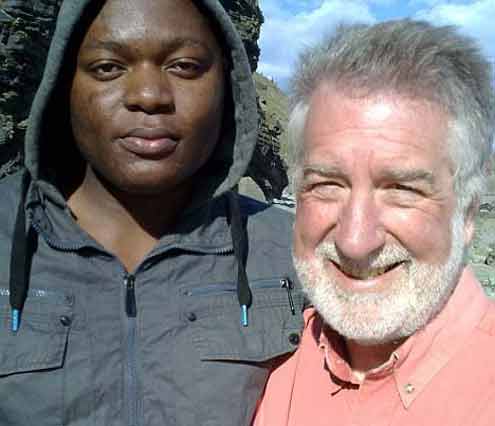 Gay Reverend Colin Coward, a priest at St John the Baptist church in Devizes,Â  Wiltshire, is entering into a civil partnership with his boyfriend Bobby Egbele. But the marriage has caused a stir among Christians because the couple plan toÂ  receive a ‘blessing’ service in church after tying the knot.

Reverend Colin Coward fell in love with Nigerian model Bobby Egbele after theyÂ  met at a Christian conference in Togo in 2007. The pair plan to tie the knot inÂ  October

Rev Coward has also refused to confirm that he will remain celibate followingÂ  the union, which is a requirement the Church of England asks of its ordained gay

clergy. Today, Rev Coward, who lives with Bobby in Marston, near Devizes, revealed thatÂ  he hopes his union sets a ‘visible example’ to other gay people within theÂ  church.

He said: ‘My goal is for everyone within the church to feel comfortable with the situation because at the moment the majority of gay Christians marry secretly.

‘It is a taboo subject but the church is now under huge pressure to change itsÂ  stance and that pressure will only increase in the future.Â  More…CatholicÂ Â Â  charity faces closure after losing appeal over gay adoptionÂ  ‘Clearly the blessing is going to be quite a sensitive issue. I know that manyÂ Â  people will see it and view it with horror.

‘But we are both deeply committed Christians so it would be unthinkable for meÂ  not to do it in church and not to do it with the congregation and with all ofÂ  our friends.

‘I hope my wedding will inspire others and set a visible example to the churchÂ  that we are not afraid.’

Reverend Coward realised he was gay as a teenager and was ordained as a priestÂ  in 1976 after giving up his job as an architect.

He came out openly as a gay vicar in 1991 before setting up the internationalÂ  gay and lesbian campaign group Changing Attitudes in 1995.

Rev Coward plans to refuse the request that he remain celibate Rev Coward metÂ  Bobby in 2007 at a Christian conference in Togo, West Africa, and the pair fellÂ  in love before getting engaged earlier this year.

Fashion designer and model Bobby, whose full name is Bobby Ikekhuame Egbele,Â  grew up in Nigeria and runs an online clothing shop Bobafrique, where he modelsÂ  the clothes.

having a service at St John the Baptist church.

However, the ceremony will be a Communion Eucharist service rather then a

blessing, which is forbidden for homosexual couples.

‘So our church blessing has to be carefully-worded in so far as it does not useÂ  the word blessing in the context of the two of us in relationship.’

Rev Coward’s boss, the Right Reverend Stephen David Conway, who is the Bishop ofÂ Â  Ramsbury, is also expected to ask him to remain celibate – a request he plans toÂ  refuse.

Under Church of England laws sex is only permitted for married couples andÂ  same-sex civil partnerships are not officially regarded as marriage. Rev Coward said: ‘I have big doubts whether he will ask me that because it’s aÂ Â  very intrusive question. It’s a ridiculous situation and a real mess. ‘What we’re allowed to do, as a gay couple, is what this is all about andÂ  certainly those in ordained ministry are not supposed to be sexually active. ‘But in practice, some bishops absolutely will give their approval knowing thatÂ  a couple is in a civil partnership and that they are sharing the same bed, andÂ  will encourage them to do that.’

A spokesman for the Diocese of Salisbury confirmed they have permitted theÂ  service to go ahead but described it as ‘separate’ from the civil ceremony.Â Â  He said: ‘A Eucharistic service celebrating friendship is what has beenÂ  sanctioned in this case. This is entirely separate from any civil partnershipÂ  ceremony.’

Tony Green, spokesman for the Lesbian and Gay Christian Movement, believes theÂ  uncertain situation is a ‘typically Anglican fudge’. He said: ‘The Bishops of the Church of England clearly did not want to be seenÂ  denying their priests something which is a legal right.

‘Yet at the same time they had to uphold the official teaching of the Church ofÂ  England concerning gay priests needing to be celibate.