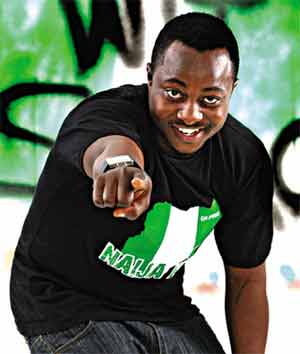 The versatile entertainer, who is also comfortable with acting, being a compere, comedian and now musician, is also getting ready to shoot his first music video of the song titled Una.

Songs on the singles, currently getting appreciable air play on Cool FM and other radio stations in the Lagos metropolis, has three tracks, are Wok Pichak featuring Stitched, Una Pata Mambo (Swahili) featuring Stitched and Lizzy, Thank You and Dance Hall Nice.

â€œMy singles are out already and it just me expressing myself musically. I have always told those who cared to listen that I have a talent for rapping and I also exhibited some of that talent while I was in the House of Big Brother in 2009. I think it is about time people felt that part of my creativity and I promise that I am not going to let my fans down on this one,â€ he said.

He also spoke on the violence which erupted again on 17 July, 2010 in Jos, where seven persons were feared dead in a pre-dawn attack at Mazah village in Jos North Local Government Area.

According to him, â€œI really wonder why such occurrence should be allowed to linger on. I still and would always say that Jos is the home of peace and tourism. It pains and makes my heart bleed when I hear of such things. It is time for people like me to stand up and say that enough is enough. The recurring violence in Jos is something we need to address urgently because if we donâ€™t, things may turn out to be far worse than the present situation.â€

On what he thinks should be done to restore lasting peace to the violence-ridden state, Kevin said, â€œin the world we live in today, it is almost impossible to have lasting peace. There is a popular saying that the only time peace will reign is when there is only one man left on earth. It is time we started sensitising the young ones on the dangers of living in a world where peace does not reign. We should inculcate the virtues of peace and unity in the younger generation. Letâ€™s make them understand the implications of violence and wanton destruction. It is only then that our future will experience peace and unity.â€