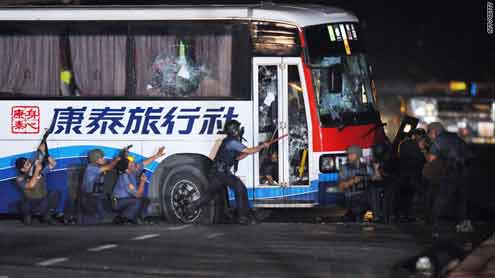 At least seven hostages appear to have survived the 10-hour hijacking of a bus Monday, and the hostage-taker died of a gunshot wound to the head, a CNN producer at the scene said.

Police said at least two hostages were killed on the bus, which was hijacked in the Philippines Monday.

There were 15 hostages on the bus when police stormed it. Nine hostages and the driver had been released earlier. It was not clear if the other six are alive or dead.

Police boarded the gunman-controlled bus about 40 minutes after the driver left and said the hostage-taker had killed all those remaining on board, CNN’s Anna Coren reported. The police retreated immediately, possibly after firing a shot into the bus, pictures from the scene showed.

Earlier, a police assault team charged the bus, breaking the windows with an ax, Coren said.

Coren said those freed from the bus included a mother and her three children, a man with diabetes, and two photographers.

Three people were able to walk off the bus under their own power after the standoff ended, Coren said. It was unclear whether they were hostages.

Mendoza was demanding his job back, police told CNN.

He wrote his demand on a board and displayed it in the bus’ windshield, the police official said.

“We are optimistic that he will eventually realize that what he is doing is against the law and he will submit to the authorities,” Magtibay told CNN.

Mendoza was wearing his uniform and carrying a rifle when he flagged down the tourist bus and asked for a ride, police spokesman Erwin Margarejo told reporters.

A tour guide for Hong Thai Travel tried to stop him from boarding the bus, the company’s general manager told reporters.

“The gunman said he wanted to have a free lift. Then the tour guide stopped him,” general manager Susanna Lau said. “Eventually the gunman got on the coach and then asked the driver to lock the door.”

Lau said the gunman did not threaten people on the bus.

But two hours later, there were no outward signs that the situation had changed.

Police cordoned off the area around the bus as they tried to negotiate, and sharpshooters were stationed nearby. Food was delivered to the hostages still on board.

ANC showed passengers peeking out from behind curtains of the parked bus and a sign posted on the bus door saying, “Big mistake to correct a big wrong decision.”

Mendoza was dismissed a year ago for misconduct unbecoming a police officer, he said.

However, CNN affiliate ABS CBN said he was fired for extortion. The police have not confirmed the report.

Six hostages from Hong Kong, China — three women and three children — were released, Margarejo said. Police chief Magtibay later said that three additional hostages had been released. At least one is a Philippines national, not a tourist, he said.

Police and the Philippines Red Cross assessed the hostages who were freed, sending some back to their hotels and continuing to interview others, Red Cross Secretary General Gwendolyn Pang told CNN.

Lau said the company has informed family members of the hostages about the situation.

Santiago said Mendoza’s family members had also been speaking with him.

“As an individual, his responses so far have been very reasonable and very psychologically stable,” he said.

Hong Kong Secretary for Security Ambrose S.K. Lee told reporters that government officials were “very concerned” about the incident and had asked officials from the Chinese Embassy in Manila to help.

“We have contacted the Philippine Consulate-General in Hong Kong and we requested that they should ensure the safety of the hostages and we also requested that the incident be resolved in a peaceful manner,” he said.