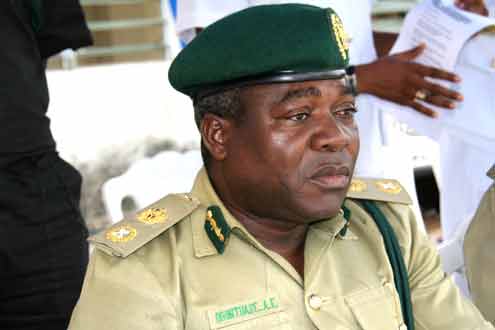 The controller of prisons in Lagos State, Mr Abayomi Oguntuase, says prisons in the state are congested and lauded the decision by the State for Magistrateâ€™s Courts to sit on Saturdays.

Oguntuase told the News Agency of Nigeria (NAN) that the move would facilitate speedy dispensation of justice and enhance the decongestion of prisons.

“Itâ€™s a welcome development and if possible, the courts should sit on Sundays to facilitate quick dispensation of justice as justice delayed is justice denied,â€™â€™ he said.

NAN reports that the development followed the passage of the Lagos State Magistrateâ€™s Courts Law (Amended) 2009, which provides for the sitting of the courts on Saturdays.

Oguntuase disclosed that prison facilities in the state were overstretched with a population of 4,700 more than double what they were expected to hold – and that about 70 per cent of these inmatesÂ  were awaiting trial.

According to Oguntuase, the 800-man capacity Ikoyi prison currently has 1,708 inmates out of which 1,593 are awaiting trial.

Oguntuase, however, explained that sitting on Saturdays was not the only solution to prison congestion as attitudinal change on the part of law enforcement and judicial officers should complement.

According to him, the justice delivery system, which comprises the police, Ministry of Justice, judiciary and prison facilities, need to be totally overhauled.

Oguntuase explained that at the police level, investigations should be conducted speedily and thoroughly, while case files of the accused should be sent to the Ministry of Justice on time.

“As long as the case files do not get to the office of the Director of Public Prosecution (DPP) on time, there is no way they will come out,â€™â€™ he said.

He also decried what he described as â€œincessant and frivolous adjournmentâ€™â€ of cases by judicial officers, saying the trend had to be adequately addressed.