â€˜Weâ€™ve Been Snatching Cars For 8 Yearsâ€™ 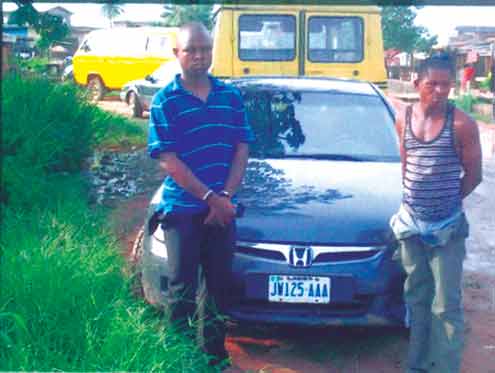 â€¢The robbery suspects after their arrest following the discovery of the car where it was parked.

The Isheri-Oshun Police Division in Lagos State Nigeria have arrested two robbery suspects who confessed that they have been into car snatching for eight years and that their wives know they were robbers though they were not going out with them.

According to the suspects, Jude Nneze, 28 and 24-year old Viginus Ihegwe, they were motor spare parts sellers but when the business collapsed, they went into robbery specialising in car snatching.

They claimed that when they snatch any car, they take it to a place and change the glasses if they printed number on it, change the plate number, block engine and then sell the car as tokunbo to motor dealers at a cheaper rate.

The gang was arrested at Ijegun area on the outskirts of Lagos with a stolen Honda car with registration number JW 125 AAA that belongs to Iyama Englena.

According to police sources, the men snatched the car at gun point along Airport road, Lagos when the owner, who is a Deeper Life Church member, was returning from evening service at about 9.30 p.m last week.

After snatching the car, they took it to Amusa Idowu Way, Ijegun, where they had perfected plans to change the glasses and engine block before selling it to a buyer.

But luck ran out on them when the police at Isheri Oshun division acted on a tip-off and arrested the two suspects with the vehicle.

The arrested men further revealed that there are other vehicles that they had snatched and sold.

When the police visited their residence, they discovered spare parts of a vehicle with an inscription of a company based in Cross River State, In Lak Company. Police suspected the vehicle was stolen by the gang.

When P.M.NEWS visited the police station, the divisional police officer, declined to comment on the matter and referred the reporter to Anti-Robbery unit at Area â€˜Fâ€™ in Ikeja, where the matter has been transferred to.

When our reporter contacted the anti-robbery unit, a police source confirmed the arrest and said the men had been transferred to their unit and full investigation had commenced.