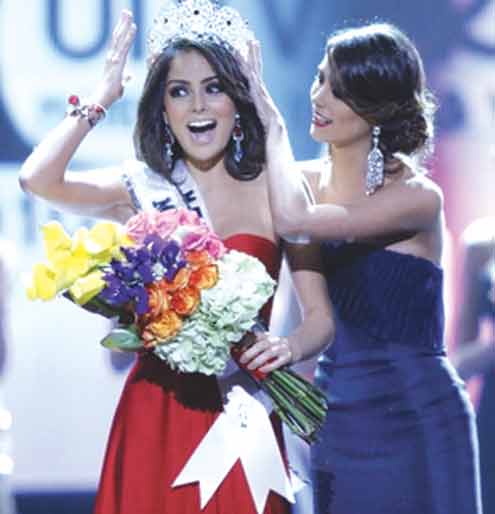 Jimena Navarrete of Guadalajara was first to answer an interview question Monday night and the last of 83 contestants standing in the headline-grabbing pageant on the Las Vegas Strip.

Her one-strap dress flowed behind her like a sheet as she walked during the evening gown competition. Earlier, she smiled in a violet bikini as she confidently strutted across the stage.

Asked by Olympic gold-medal figure skater Evan Lysacek how she felt about unsupervised Internet use, Navarrete said the Internet is important but parents need to be careful and watch over their kids.

â€œI do believe that Internet is an indispensable, necessary tool for the present time,â€ she said through an interpreter. â€œWe must be sure to teach them the values that we learned as a family.â€

Navarrete â€” whoâ€™s been modeling since she was 15 â€” is Mexicoâ€™s second Miss Universe. Lupita Jones of Mexico won the title in 1991. Navarrete replaces Miss Universe 2009 Stefania Fernandez of Venezuela.

Navarrete was immediately congratulated on Twitter by Mexican President Felipe Calderon and his wife, Margarita Zavala.

â€œCongratulations to Jimena Navarrete for her deserved victory as Miss Universe,â€ Calderon said. â€œThis will serve Mexico, (and) our image as a country.â€

With fans in some 190 countries watching on television and keeping tabs on social networks, Navarrete and her competitors introduced themselves while wearing over-the-top national costumes. They then danced in silver and black dresses for the showâ€™s opening number before the top 15 finalists were announced.The final 15 walked in swimsuits while Cirque du Soleil musicians played Elvis Presley songs including â€œViva Las Vegas.â€ The last 10 impressed in their gowns while John Legend and the Roots played a soulful medley including â€œSave Room.â€

By the end of the show, seven of the top 10 trending topics on Twitter had to do with the pageant, its contestants, its judges or owner Donald Trump. The mogul co-owns the pageant with TV network NBC.

The show was without any major gaffes, except for Miss Philippinesâ€™ answer when asked what her biggest mistake in life was and how she fixed it.

â€œIn my 22 years of existence, I can say there is nothing major,â€ Venus Raj said.

Before the pageant, Raj was rated among the top contestants in an online poll on the pageantâ€™s website. She finished in fifth place.

Navarrete won a package of prizes including an undisclosed salary, a luxury New York apartment with living expenses, a one-year scholarship to the New York Film Academy with housing after her reign, plus jewelry, clothes and shoes fit for a beauty champion.

Miss USA has not been named Miss Universe since Brook Lee won the title in 1997.