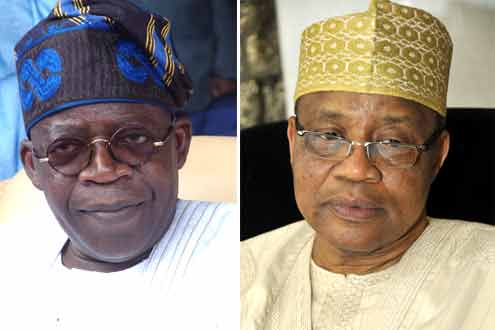 Speaking yesterday at a book launch in Lagos, South-West Nigeria, Tinubu said Babangida and others who now claim to be democrats were the ones who annulled the June 12, 1993 presidential election and thwarted the struggle by genuine democrats to revalidate it.

He said IBB should respect the aggregate wishes of Nigerians that they do not want him to return to power again.

Tinubu called for resistance against IBBâ€™s ambition if he fails to shelve his quest to contest.

According to Tinubu, who was the Chief Presenter of Diary of a Debacle: Tracking Nigeriaâ€™s Failed Democratic Transition (1989-1994), written by Dr. Olatunji Dare, many of those who now claim to be democrats were actually those who frustrated the fight for the revalidation of the annulled 12 June 1993 presidential election which was adjudged the freest and fairest in the nationâ€™s history.

â€œThere are many of them who now preside over some of our democratic institutions including amending the constitution for us while the grandmasters of the annulment are preparing to come and reap where they did not sow.

â€œDo they say they are democrats and they want to contest the next election and they annulled June 12? We must resist and take control of our future. We must not forget history. We must go back to the basics,â€ he said.

Tinubu further took a swipe at politicians who are not consistent and who put their interest before those of the people of the country, describing them as â€œmen of yester years who many years after would return to eat their vomit; those who become zoning advocate because of personal ambition.â€

Speaking in the same vein, a stalwart of National Democratic Coalition, Chief Ayo Opadokun, called on Nigerians to resist Babangida.

He said the â€˜evil genuisâ€™ is toying with the citizens of this country.

Other speakers at the event also spoke against the ambition of the former military head of state. Former Chairman of the Economic and Financial Crimes Commission, Nuhu Ribadu, said the annulment of the June 12 election almost tore the country apart.

Ribadu, who said he was still in the police force when the election took place, added that the late Moshood Abiola won it.

He described the period as very important in the history of the nation and that the annulled election could not be treated with levity and the demands of cheap politics.

Denying that the northerners were happy over the annulment of the election, Ribadu said the act was the handiwork of â€œa tiny elite. The elite was emboldened by the disdain for the beauty and respect that defined the integrity of a social community.â€

He said the annulment represented an act of political corruption that robbed 14 million voters of their franchise.

â€œIt also denied our nation a badly needed peace and stability by generating so much conflict and tension in the land like the exile of hundreds of outstanding and bright Nigerians; and the persecution of numerous journalists, civil society and community activists, as well as many patriots.â€

He advocated for the immortalization of Abiola.