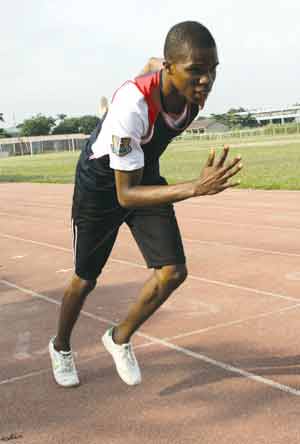 Victor Ojobor trains at the UNILAG Sports Centre during the camp exercise of the Adopt-A-Talent Sports Programme. Photo: Akin Farinto.

If there is one thing Victor Ojobor would like, it is his wish that someday he would smash the athletics record set by Jamaicaâ€™s Usain Bolt and it seems his dream is fast becoming a reality.

This followed the experience garnered at the just concluded camping exercise of the Adopt-A-Talent Sports Programme, a talent hunting project of Governor Babatunde Raji Fashola of Lagos State, Nigeria.

Ojobor, to some people, may be frail, but he is not seeing his frailty as an impediment to his quest to break the record set by the Jamaican.

The 16 years old Ojobor, for the first time, got the chance to exhibit his talent when he scaled the hurdles at the screening exercise of Adopt-A-Talent project. He was called to the just concluded camp at the end of which he was able to say to whoever cares to listen that he was already looking beyond the immediate.

Ojobor for now may be an unknown figure in theÂ  game both at home and abroad, but he vowed to take the track and field world by storm someday.

Ojobor reckons that the environment here in Nigeria may not be conducive for him, but he remains undaunted in his quest to first conquer Lagos, Nigeria and Africa before taking on the world.

He urged the Athletics Federation of Nigeria, AFN, led by Solomon Ogba, to take a cue from what Lagos State is doing by catching the youthsÂ  at their very tender age and groom them. He said the Adopt-A-Talent Sports programme would go a long way in helping athletes to actualise their dreams.

Speaking with P.M.Sports at the end of the camping, he vowed that if any competition is organised by the management of the talent hunt, he has gotten what it takes to compete in both the 100m and 200m races.

â€œI never knew I could do well in athletics, but the camping has exposed me to some techniques in the game. If not for the camping I wouldnâ€™t have known that one needs a good coach.Â  I want to say that after passing through the rigours at the camp, I know that I have a bright future ahead of me in athleticsâ€ he said.

Bolt may be a little taller than Ojobor, but the Nigerian is an athletic freak of nature.

The Jamaican is the fastest runner in the world. He is a guy too tall to be a sprinter, who makes it look effortless as he blows past people. And Ojobor noted that he is always thrilled with his role model each time he sees him on track.

Ojobor said: â€œIt is one thing to have a role model and another thing to emulate him. I always watch Bolt closely whenever he is competing in any international meet. At a stage I never knew Bolt is an athlete, I thought he was a basketball player until I saw him racing during an athletic event organised by the International Amateur Athletic Federation, IAAF. Since then, I told myself that if he could win with his strides, why canâ€™t I do the same? Iâ€™m glad that the Adopt-A-Talent project has given me the opportunity to discover my talent and what Iâ€™m capable of doingâ€.

HeÂ  is not the only athlete in the Ojobor family. He told P.M.Sports that his elder sister is also a sportswoman.