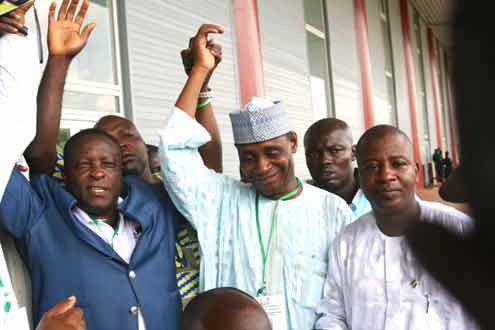 The incumbent President of Nigeria Football Federation, NFF, Alhaji Aminu Maigari this afternoon returned as the boss of the FA in an election marred by controversy.

Maigari won the poll in a landslide victory that saw him leading other contestants with a wide margin of 31 votes cast by 43 delegates.

Other presidential aspirants, who pulled out of the poll because of the subsisting court injunctions, were still recognized in the election. The electoral committee recorded zero votes against their names

In the election for the post of 1st Vice President, Mike Umeh won with 26 votes, Jareth polled 13 votes, former acting scribe of the FA, Fanny Amun got 3 votes, while Obinna Ogba won 2 votes.

The venue of the election, International Conference Centre, Abuja, was cordoned off by men of the Nigeria Police who were on ground to forestall any act capable of undermining public peace.

Accreditation of delegates, officials and sports journalists were rounded off by 10 a.m. before the commencement of the election by the electoral committee headed by Abdulrahman Mustapha.