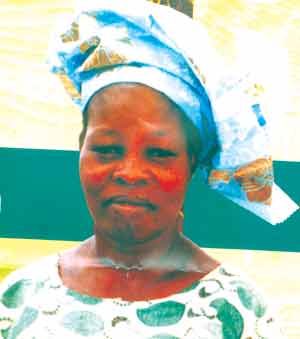 A 57-year old woman, Temidayo Florence Abiola, has been allegedly beaten to death by her neighbour Abijin Akinmade.

Temidayo nee Olawoye was alleged to have been beaten to death by Abijin while she was preparing to cook an evening meal.

The incident happened at their residence at 13, Afariogun Street, Orile-Oshodi, Lagos Nigeria, where both of them reside.

P.M.News gathered that the late Temidayo had a little misunderstanding with one of her neighbours. She accused Abijin of taking sides with the neighbour which resulted in both of them exchanging words.

In the course of the quarrel, Abijin allegedly hit Florence on the head and she started vomiting. Before she could be rushed to hospital she died on the way.

The matter was reported at Akinpelu Police Station and the accused was arrested and is now facing murder charge while the body of Temidayo was deposited at Isolo general hospital.

When P.M.News visited the residence of the deceased the relations were mourning her. Some of the residents expressed shock over what happened.

At the police station the divisional police officer in charge of the station was not around to comment on the matter but a police source confirmed the incident and referred the reporter to the State Criminal Investigation Department where the matter is being investigated.

Meanwhile, an arrangement has been made for her funeral service, while her final burial will take place at her home town, Erin Ijesha, Osun State tomorrow.

Florence is survived by four children.