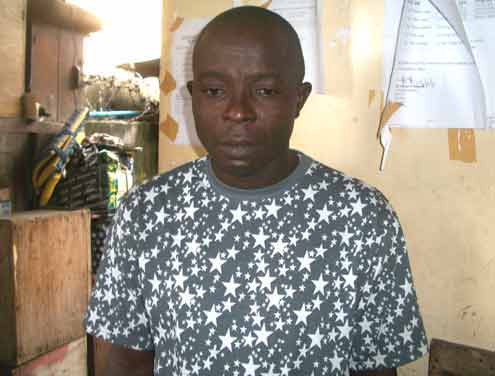 P.M.NEWS gathered that both Emmanuel and the late Paulina were inside the room he rented for her at Igando in Alimosho area of Lagos State at about 10 p.m. when she received a phone call that aroused his suspicion and resulted in a quarrel. The ensuing scuffle between the two lovers led to Paulinaâ€™s death.

Speaking with P.M.NEWS, the suspect said he never meant to kill his lover. He stated that when Paulina fell down during the scuffle, he thought she was pretending or joking.

â€œWhen she fell down and was lying on the floor, I thought Paulina was playing or pretending. But about five minutes later, I watched her closely and discovered she was no longer breathing. I became afraid. I ran out to alert our neighbour who took her to the hospital where doctors confirmed her dead,â€ Emmanuel, father of 5 from another woman who lives with him at 5/7 Daudi Street, Igando narrated to our correspondent.

But while the police said there were marks on the body of the late Paulina, her lover, Emmanuel claimed he did not beat her to death. Immediately Paulina was pronounced dead, Emmanuel bolted away, but it was learnt he resurfaced about a week later and surrendered himself to the police at Igando.

He was arrested and after a preliminary investigation, the case was transferred to the State CID.

Both lovers are from Edo State.Â  The late Paulina had a 17-year old daughter from a previous relationship.

Investigation into the incident is ongoing.