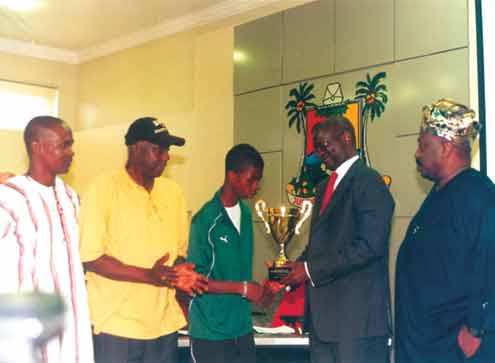 The Executive Governor Babatunde Raji Fashola (SAN), has again shown his interest in sports development in the state with his support for the 36 Lion Academy in their quest to defend the International Youth Cup in Chicago, United States of America.

Fashola, a sportsman par excellence, has decided to bankroll the teamâ€™s trip to Chicago again, to ensure that the team do the state and nation proud in the youth tournament holding between 1-8 September. The governor sponsored the academy to the 2008 and 2009 editions.

The team, who are expected to depart Nigeria for the competition this weekend, are returning to a familiar ground, having emerged champions in the 2008 and 2009 editions of the U-16 Championship.

During the 2008 edition, which they won, 36 Lion maintained an unbeaten run that earned them the best team of the competition. The club, who have an objective of discovering budding football talents at their tender ages and nurturing them to stardom, believe they can consolidate on their previous achievements when the international competition kicks off next week.

It is pertinent to note that the team have maintained a winning streak of 20 matches at the international tourney, designed to keep young and aspiring footballers busy and also expose them to the latest technique of football.

As the team prepare to jet out of the country, the Chief Executive Officer, CEO of the club, Gafar Liameed and his team have commended the sports loving governor Fashola for sponsoring their trip to America.

They assured Fashola that they would not let the Lagosians and the government down, promising to put up a good campaign at the tournament.

According to Liameed, â€œWe couldnâ€™t have recorded any notable landmark as a team if not for the assistance of our sports loving governor, Fashola. I must confess that, it is indeed a dream come true for the entire team because we never knew that we could go back and defend the cup.

â€œWe have almost lost hope of featuring in the tourney until the governor helped to facilitate the clubâ€™s trip. Our dream of traveling for the tournament would have been a mirage if not for the governor. So, on behalf of the team, I want to thank him and assure that we will keep the stateâ€™s flag and that of Nigeria flying in Chicago and our plan is to return to the country as champions again.

â€œThese boys are not going to Chicago for jamboree, but to do Lagos State proud. The players are going to America, courtesy of the governor and I know that the quality of training they have had will help them when the competition beginsâ€.

Skipper of the team, Sodiq Saliu Popoola and his assistant, Ebuka Friday, say they are aware of the task ahead. Both players expressed great thanks to the clubâ€™s CEO, Liameed for giving the young team a chance to exhibit their talent, saying their trip to Chicago will be an eye opener for the players.

When the idea of forming the club crept into the mind of Liameed on 18 December, 2000, he knew that the club would go places, no wonder 36 Lion are now among the clubs to beat.

International scouts now visit the club for young footballers within the ages of 12-16 years in the academy, while the senior team have players of about 17 years and above for the established clubs locally and internationally.

Notable among the achievements of the club in recent times was their promotion from the Amateur Division to the Nigeria Football Federation, NFF National Professional 1 League.

Governor Fashola watched with admiration when the U-14 of 36 Lion defeated Kash F C 3-0 in a friendly match early this year during the official opening ofÂ  the Campos Mini Stadium in Lagos Island, Nigeria.