Iâ€™m Back And Better 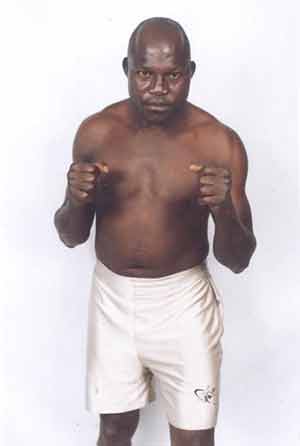 â€¢Enuma: Iâ€™m back to winning ways.

Former National Cruiserweight Boxing Champion, Chidi Enuma, signed a come back deal with Napoleon Lion, President of Lions Den Boxing International, for a management and promotional deal in the United States of America, through Onyeka Elum in his quest to become a champion. In this interview with ADEBOBOLA ALAWODE the boxer says he is back and better.

How do you feel losing your father just at the time you signed a deal with Lions Den Boxing International?
It is not easy to lose one’s father, but what can I do? I canâ€™t query or fight the Almighty God. I would have loved my father to see me actualise my dream of becoming a world champion. Even at that, Iâ€™m happy because very soon I would be travelling to America to finalise the contract terms before I step into the ring.

About the contract, how will you describe the opportunity given you by the new management company?
To be sincere I never expected that I was going to sign any contract with an international boxing management company. But with the contract almost done, I feel I can now go all the way and become a world champion.

You have not had a fight since 2004, how did you get the offer?
It was not easy, but I thank my manager, Onyeka Elum, for his efforts. He worked tirelessly to get me this contract, but we still have to formalise the contract terms before I can beat my chest and say thatÂ  Iâ€™m a fulfilled man and successful boxer.

When are you concluding the formalities?
Hopefully, the contract should be concluded next month. I will be travelling to the USA with my manager to see how we can put finishing touches to the contract papers. thereafter, we’ll know the next line of action.

For six years, you didnâ€™t step into the ring for a fight, donâ€™t you think you would be rusty?
It is true that I didnâ€™t fight for six years but I do train. Not having a fight for six years could kill a manâ€™s dream, but I still believe Iâ€™m back and better. In as much as I have been training on my own, I donâ€™t think it is right to say that Iâ€™m rusty.

But for the six years, you must have lost touch?
Thatâ€™s a big lie, Iâ€™m as fit as a fiddle. I donâ€™t think any boxer in my weight category can match me. My firepower remains the same. Everything about me is still intact. My flexibility, footwork, stamina and others are still intact, so Iâ€™ve not lost touch or steam.

What were you doing to make ends meet during that long break?
I got involved in other viable ventures because boxing was not paying my dues. I have a family and I must fend for them, so I took the decision and it paid off.

What is responsible for the lull in the profession?
It is about administration. The administrators of the sport are not doing enough, though they still deserve commendation. The present administration, led by Dr. G C Kanu are really doing well because I believe they have the good of professional boxers at heart. We should just wait and see how far they can go.

â€œThe Nigerian Nightmareâ€ Samuel Peter, has a fight next month against Wladimir Klitschko, do you think Peter can win the bout?
Peter has all it takes to defeat his opponent but he should be ready for the worst. The fight wonâ€™t be that easy because his opponent is taller and might use that as an advantage. Anything can happen.

Any advice for Peter?
Peter should not see his opponent as a demigod but he should change his approach to the fight this time around. The way Peter fought against him the first time showed that his corner didnâ€™t give him the right instruction. In this fight, he should be ready to lay down his life because failure to defeat his opponent could kill his dreams and the aspiration of reclaiming his title.