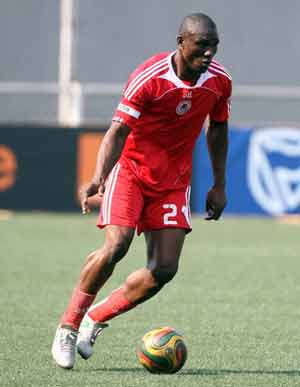 Heartland captain, ThankGod Ike, says they hope to break their scoring duck in the Orange CAF Champions League and record their first win of the group stage against the competitionâ€™s former champions, Ismaily of Egypt on Sunday at the Dan Anyiam Stadium, Owerri, Nigeria.

The Egyptian giants earned their first victory in the group stage of the competition courtesy of a lone strike against Heartland in Ismaily a fortnight ago, but Ike says the Naze Millionaires, as Heartland are known, will make amends in the reverse fixture to brighten their chances of advancing from Group B.

â€œEverything is possible in football. Itâ€™s unfortunate that we are at the bottom of our group but all we need is just the three points on Sunday and from there we can find our way out of the group.

â€œWeâ€™ve had hard luck in front of goal and we hope to start scoring against Ismaily on Sunday. Everybody is serious about winning the game; the clubâ€™s management has told us of the importance of the game and we are confident of a win.

â€œOur coaches have been doing great jobs and the spirit in camp is very high. Samson Siasia and Emeka Ezeugo are known names in African football, having made their mark as players. They have given us the needed encouragement and determination to turn things around,â€ the Nigeria international said.

Heartland, last yearâ€™s finalists, are currently at the bottom of Group B with just one point from three matches, only managing to score just one goal and conceding three, while Algeriaâ€™s JS Kabylie sit in pole position with maximum nine points. Six-time champions Al Ahly are second with four points.

Ike admits that it has been a tough group for Heartland but believes his side are not pushovers either.

â€œAll the teams in Group B have been there before and they are difficult to beat but we hope to turn our fortunes around against Ismaily.

â€œThey are all big sides especially Al Ahly, which parade a lot of international players. If we can win our two remaining home games and then get a favourable result against Ahly away, we can still advance from the group. Everything is possible,â€ Ike said.

The 25-year-old central defender says Ismaily Nigerian-born striker, Ndubuisi Eze, who scored the winner against Heartland, will not pose a threat in Owerri.

The former Julius Berger striker joined Ismaily in July after a brief spell at Libyan club Nasr after proving his mettle in the continent with Sudanese side, Al Hilal, by helping them reach the semifinal of the CAF Champions League in 2007.

A goalkeeping error from Heartland gifted Eze his first goal for the Egyptian side. Goalkeeper Austin Brown came off his line to chase after a harmless looking ball but miscalculated the bounce, allowing Eze to poke home on his debut and give Ismaily their first points of the campaign.

â€œEze is a very good player. But we are not afraid of him and I think we did a good job on him in the first leg but that little mistake gave him the opportunity to score. We are ready to make our fans happy once more with a return to winning ways.â€

The powerfully built defender was influential in Heartlandâ€™s impressive run to last yearâ€™s final, by using his superior power at the back and aerial ability during set pieces to good effect and he hopes to repeat same again.

â€œWhat matters is the three points. If I get to score, that will be great, but what matters is total victory, which is uppermost in everybodyâ€™s minds.â€