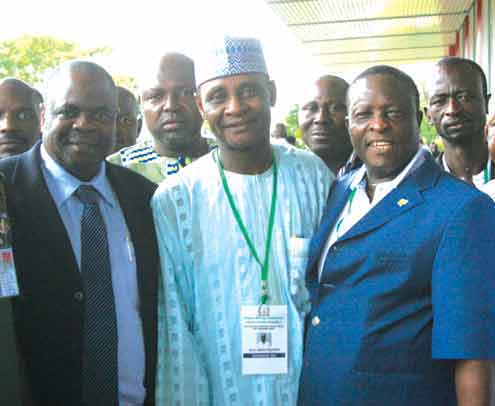 The Nigeria Football Federation, NFF, elections that returned Alhaji Aminu Maigari as president,Â  has been described as a sham that will further plunge the game into more troubles.

Some football administrators who spoke to P.M.Sports early today said the process that produced the new board of NFF has shown that a cabal that has held grip on Nigerian football for a long time has again triumphed.

Chief Olusegun Odegbami, M.O.N, who pulled out of the elections due to a court injunction that had ordered the stoppage of the polls, said he was not happy with the way the elections were conducted, adding that he would pursue his challenge of the polls to a logical conclusion. Another contestant, Alhaji Sani Torro, said the result is unacceptable as the delegates only went there to select and did not elect the right people in to the board.

Former Nigerian international, who is also a lawyer, Adokie Amasiamaka faulted the NFF for going ahead to conduct an election which a court of law has issued an injunction for his stoppage, saying all the officials elected should be arrested and faceÂ  trials for contempt of court.

â€œThis was a breach of court order. I think those officials should be arrested,â€ he said.

â€œI told this nation that the former NFF President, Sani Lulu would derail our football when he came in, all of us knew how he ended. So, itâ€™s really unfortunate that NFF failed to respect the Court. This goes to show that we donâ€™t regard the highest legal authority as a nation,â€ he said.

Former Super Eagles player, Yisa Shofoluwe said he was disappointed with the outcome of the elections, adding that MaigariÂ  lacks administrative and managerial skill to head the NFF.

â€œWe are heading for another football crisis because the best candidates have not been elected into the board of NFF. I donâ€™t think our football will move forward,â€ he said.

Former Chairman of Nigeria Football Association, NFA, Alhaji Ibrahim Galadima said: â€œIn as much as I would not want to attack any personality involved in the election, but itâ€™s unfortunate that we have not really learnt our lesson to do the right thing.â€

But Leye Adepoju, a lawyer, who is the chairman of Oyo State FA and a member of the new board of the NFF, said the electoral committee went ahead to conduct the election because the committee, headed by Mustafa Abdulrahaman was not duely served with the widely publicised court injunction. “To me a court injunction should not be served on the pages of newspapers,â€ he said.

Coach of Rangers of Enugu, Alphonsus Dike believes those who won the elections are familiar with Nigerian football. â€œI think they have what it takes to move the game forward,â€ he said.

Former Member of the NFF Princess Bola Jegede also expressed satisfaction with the results of the polls, saying that the elections were free and fair. She urged all aggrieved candidates to support the new board to move Nigerian Football forward.

â€œI am happy that the elections have come and gone without any problem,” she said.

Yesterday’s elections saw the return of Felix Anyansi, Mike Umeh and a few others, who were sacked with the Galadima-led NFA boardÂ  before the immediate past board headed by Alhaji Sani Lulu was elected four years ago.